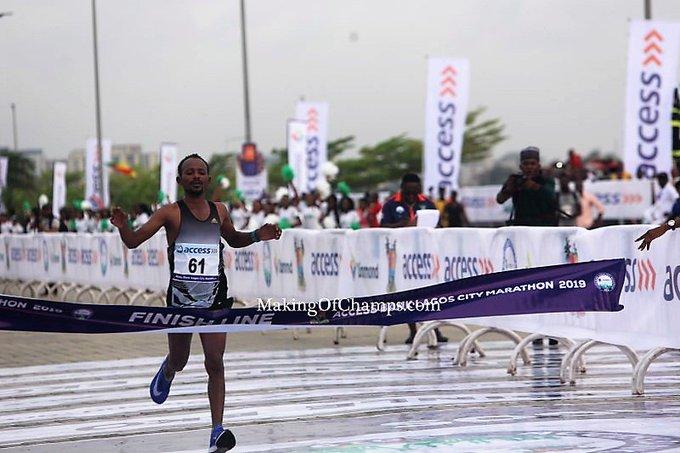 Legese triumphed ahead of Kenyans Joshua Kupkorir and William Yegon, who placed second and third at the IAAF-sanctioned event.

The participants in spite of downpour in the early hours of Saturday defied the rainfall to ensure they were not late for the race.

Some of the runners told NAN at the starting point of the 42km race that they slept within the stadium axis as they did not want to be late for the race.

Ismail Agunbiade, 32, said that he had to leave his house around Kilo area in Surulere at 5 a.m. in spite of the rain.

“I could not even sleep because all my thought was on the marathon, I could not afford to be late. Going with the crowd is the fun of starting the race,” he said.

Eniola Smith, a student of Yaba College of Technology, said that the rain was no deterent, saying that the weather would make running easier for her.

“Though this is my first time of participating, I am sure the weather will improve the running time of elite and amateur runners.

“I am happy to be participating even when I know that I may not win. The beauty of it is running,” she said.

Amira Ismaila, also a student said that she was happy that it rained, saying that it would make the weather bearable.

She also commended the organisers for starting as scheduled.

In the Nigerian category, the first place winner will go home with N3 million, second position will win N2 million, while the third position gets N1 million.

Shola Ajani, who came to cheer the runners said that she had to defy the rain to catch a glimpse of the runners being her first time.

Kazeem Tijani, a resident of Masha in Surulere said it was fun cheering the athletes all the way.

“I enjoyed the experience last year, though I could not run because of health issue, I am here to give my support,” he said. (N

In Kaduna, Habiba, a young woman on the streets of Barnawa, shared her story as she held a baby and a wrap of marijuana. Read more »

Read the original article on Vanguard.