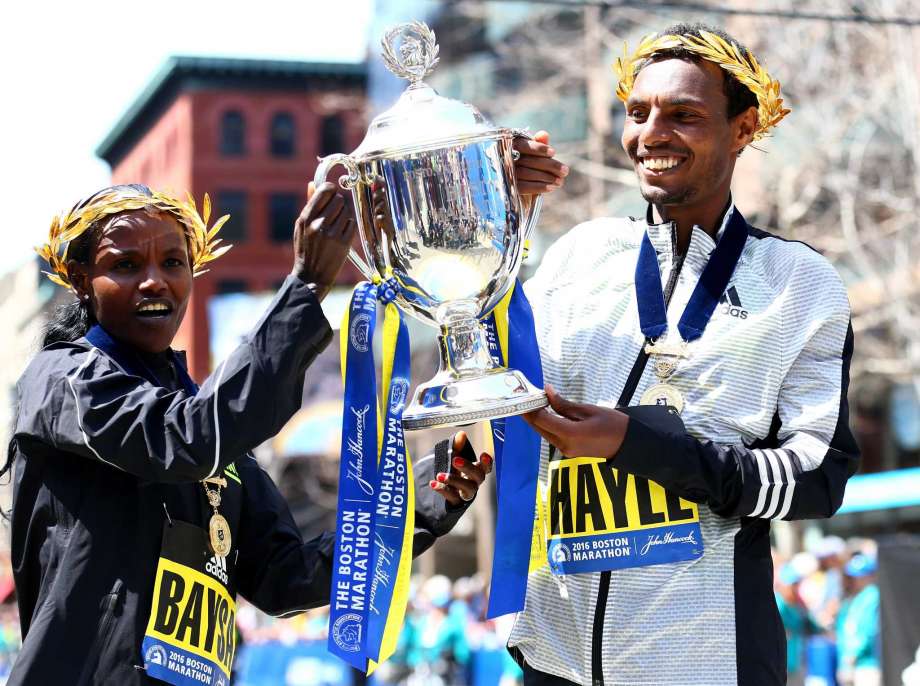 Boston (HAN) April 19, 2016. Public Diplomacy & Regional Security News. The Ethiopians ran past the Kenyans on their way to the Boston Marathon finish line Monday and nearly swept them off the victory podium.

Lemi Berhanu Hayle won the 120th edition of the men’s race, and Atsede Baysa overcame a 37-second deficit on the women’s side for Ethiopia’s first sweep of the world’s most prestigious marathon.

Hayle finished in 2 hours, 12 minutes, 45 seconds to beat defending champion Lelisa Desisa by 47 seconds. Yemane Tsegay was an additional 30 seconds back to round out an all-Ethiopian top three.

“In sports, sometimes that happens. But not always,” said Desisa, who also won the 2013 race. “It is the performance on the day.”

Kenya had dominated the Boston Marathon since the professional era began in 1986, winning the men’s race 14 straight times from 1991-2004 and 20 out of 22 before Desisa earned the first of his two victories three years ago.

But the Kenyans have been beset with doping problems. The World Anti-Doping Agency put the country’s athletics program on probation after more than 40 athletes tested positive for performance-enhancing drugs since the 2012 Olympics, including three-time Boston winner Rita Jeptoo.

Instead, it was its East African neighbor that had its anthem played over Copley Square — twice. Ethiopia claimed its sixth title in the men’s race — including three of the past four — to go with six more in the distaff division.

Hayle pulled away from Desisa as they crossed over the Massachusetts Turnpike heading into Kenmore Square. He tapped his chest as he ran down Boylston Street, held his arms out to bask in the cheers of the crowd and then, after crossing the finish line, did a celebratory skip-jump.

Baysa trailed by 37 seconds at the 35-kilometer checkpoint before chasing down Tirfi Tsegaye on Beacon Street in Brookline, two miles from the finish line. The two-time Chicago Marathon champion won by 44 seconds in 2:29:19.

Joyce Chepkirui was third — the lone Kenyan to medal.

Most of the top Americans, including 2014 winner Meb Keflezighi, skipped the race after running in the U.S. Olympic trials in February. Other countries pick their Olympic teams by committee, and the performances in Boston could help Monday’s top finishers earn a ticket to Rio de Janeiro.

“This is a major marathon,” Baysa said through an interpreter. “We don’t know what they are thinking, but we are confident they will select me.”

Gracey was born into marathoning: Her father was the No. 2 American in Boston in 1989; the next year she was born on race day while he was running. She and Sarah Crouch, of Blowing Rock, N.C., were among the leaders through the first seven miles before falling behind.

On a clear day with a slight headwind, cool temperatures at the start warmed to 62 degrees by the time the winners reached the Back Bay. It warmed further as the day went on — an added challenge for the 27,491 runners who left Hopkinton in four waves on Monday morning.

Fifty years after Bobbi Gibb sneaked onto the course and became the first woman to finish the race, more than 14,000 women were in the field that made the 26.2-mile trek to Copley Square, where a commemorative logo greeted them at the finish. Gibb served as the grand marshal this year.