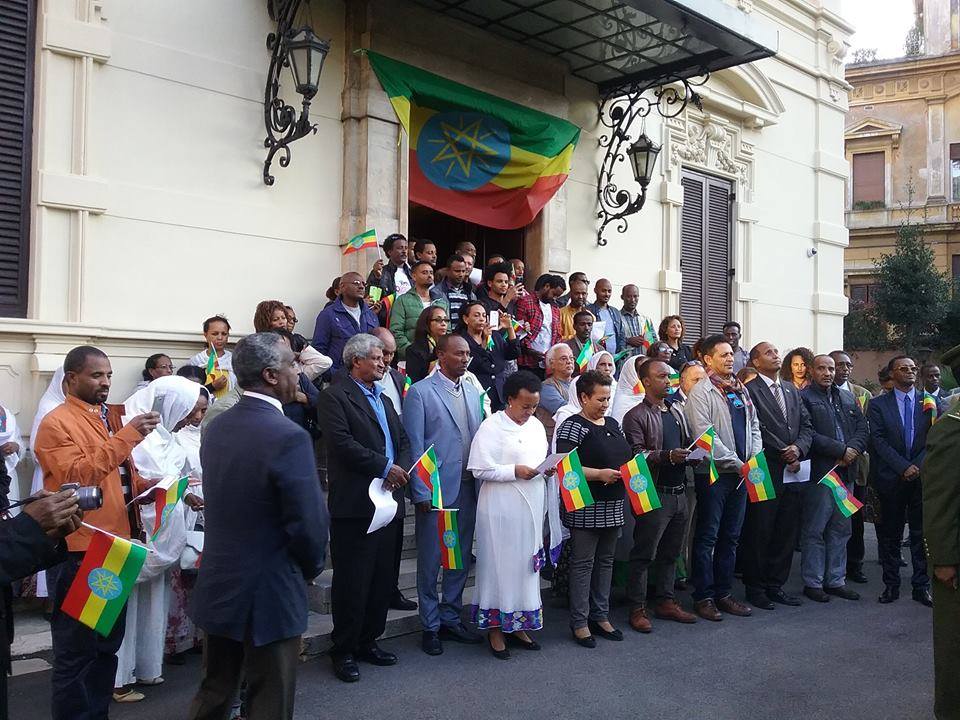 Rome (HAN) November 5, 2015. Public Diplomacy & regional Security. Several hundred members of Ethiopian communities living in and around Rome met Sunday (November 1) to celebrate the 8th commemoration of Ethiopia’s National Flag Day at the Ethiopian Embassy in Rome. The event organized by the communities and the Embassy was held under the theme of “Ethiopia: A country that has been working hard to raise its flag and realize its renaissance with public participation.”  Ethiopian religious leaders living in Rome attended and the occasion included a panel discussion on flags and emblems and cultural dances from the various nations, nationalities and peoples.

Ethiopia’s Ambassador to Italy, Ambassador Mulugeta Alemseged congratulated the communities on the celebration of the Flag Day, the ultimate national symbol above all political or social differences uniting all Ethiopians.

The Ambassador noted the history of peoples’ efforts to achieve a democratic and just governance had been unstoppable,  leading to the demise of the brutal Derg regime and the establishment of the Federal Democratic to equality, prosperity and democracy with a true spirit of unity under one national Flag.    The Flag, he said, was a symbol of the equality of all the nations, nationalities and peoples of Ethiopia and of their cultures, religions and languages and of unity amid diversity.

The secret of such success, the Ambassador said, was the participatory and democratic approach that provided for the Ethiopian people including those in the Diaspora, to be the principal owners of their country’s agenda. He congratulated the Ethiopian Diaspora, especially those in Italy, for their role in the development and democratization. He commended their in the major development projects and hoped this would continue to be strengthened. MFA