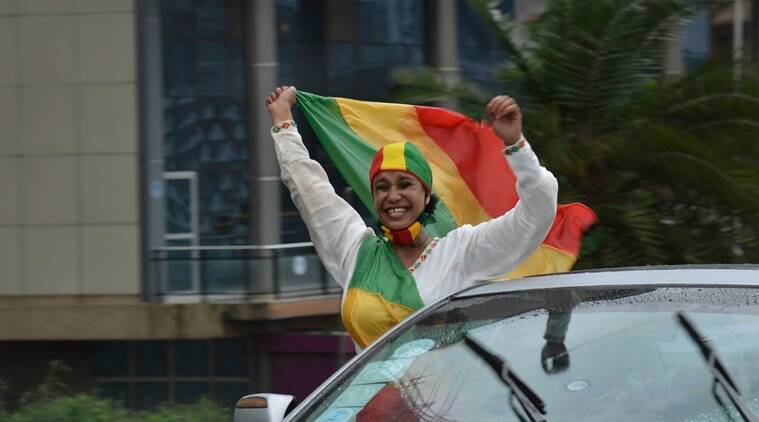 At 11:30 a.m. local time, traffic came to a screeching halt in Addis Ababa, with drivers and passengers coming out of vehicles and clapping for the defense forces.

The idea to hail defense forces was proposed by a group of Ethiopian artists including the veteran artist Debebe Eshetu, who was imprisoned by TPLF in 2005.

This is the recently liberated people of Alimata town in Tigray who TPLF junta says voted 100% for TPLF. pic.twitter.com/ZYPeuYjE3J

Abiy said on Tuesday since the three-day surrender ultimatum given to TPLF was over, the army will launch final combat in the coming days.

Speaking to Anadolu Agency Amarech Zewdu, 50, said she was happy to see Ethiopians uniting behind soldiers to maintain the sovereignty of the country.

Lieutenant Abere Nega, 51, a retired soldier, said he was ready to join soldiers to go to the war front.

“I have never cried in my life before. I cannot now resist my tears,” he said.

On Monday, Ethiopia launched airstrikes that it claimed destroyed ammunition depots of the TPLF in Mekele suburb.

Last week, the TPLF forces fired rockets towards the neighboring Amhara State inflicting partial damage to airports of the lakeside resort city of Bahir Dar and the historical city of Gondar. The TPLF forces also fired rockets targeting the airport in Asmara, the capital of Ethiopia’s northern neighbor Eritrea.

Abiy who hails from an ethnically mixed family won the 2019 Nobel Prize for Peace for making peace with Eritrea and fostering regional cooperation. The peace pact was not received favorably by the TPLF leaders who have been controlled the Tigray region.

Last week, the Ethiopian upper house of parliament, the House of the Federation, decided to establish an interim administration in Tigray to replace the TPLF. Observers believe that Abiy’s policies had been sidelining the Tigrayans and made them prone to the anti-corruption witch hunt.