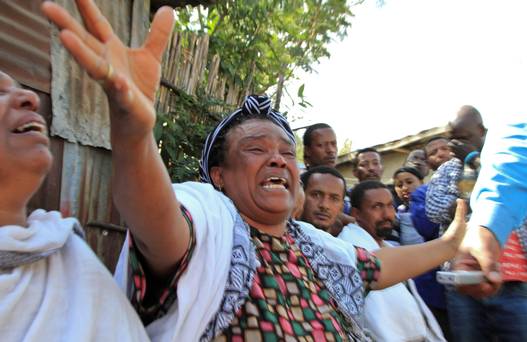 ADDIS ABABA (HAN) November 9.2016.Public Diplomacy & Regional Security News. By Christine Yohannes. Today I am writing with mixed feelings of wanting to stop at the next word and the vehement desire to write the one right after. Death is almost always close to each of our homes but at times so distant we often forget that it will end up at our doorsteps until it does. The discussion I would like to raise is the one of ethics and boundaries when it comes to dealing with this hard to swallow issue that hits all of us at one point or another in our lives. I think that we need to address the approach in dealing with death within Ethiopian culture. When we give it a thought, away from the crying crowds and wailing saddened voices do we ever think about what the processes of death really are? Do we ever wonder what it entails for the bereaved to announce the death of a loved one or even to express our deepest condolences?

First thing first, can we start by exploring the fear of death that we somehow tend to not only have but also pass on to the next generation? Like the stories used to scare children into being the good and well behaved tokens of our capacity to discipline. The monsters that will come in at night and take us away into death land, away from the parents that so lovingly provide us with warmth, love and shelter. The darkness we associate with this thing called death that is supposedly the enemy taking away all of the ones that we care about. It is clear of course, depending on the personal beliefs of each of us, death does mark a sort of ending of a life shared and enjoyed by those around us. And of course, based on each of our personal beliefs it might also mark the beginning of a life farther from the ones waiting or left behind here on earth.

Whatever the beliefs, it isn’t the hope left after the death of a loved one or what awaits the traveling soul that I would like to discuss here but the way we deal with the news of the death. I am so amazed and find myself too often dumbfounded by the wailing reactions people adopt when entering the home of the mourning. At a certain point in our lives, we all understand that those crying, gasping sounds often put on, such as make up or a tie worn to leave the house except in this case in the reverse – entering a home. I have tirelessly and wholeheartedly tried to understand where this custom stemmed from and found myself each time bewildered by the lack of response on the matter. I always wonder why it is that we don’t question why other parts of the world don’t share this same custom? Maybe, one might say that these are fleeting customs and traditions that are mostly unpracticed by the upcoming generations but there is still place and a calling necessity to talk about it.

Furthermore, another issue I have been thinking about and currently forcefully dealing with, is the use of technology and social media added to this existing custom already ingrained in Ethiopians’ DNA. There is something that all of a sudden seeps into the mindset of many that I have witnessed from where I stand, that compels them to announce the bereavement online and specifically on social media. I am certain and convinced that everyone deals with death and mourning in different ways however, there should be a line that needs to be drawn when it comes to the broadcast of such feelings. Again, though that needs to be left to the personal choice of every single person, should we not let ethics come into play at one point in this regard and consider the feelings and emotions of the immediate family of the departed? Can we consider maybe sharing our grief, disbelief and sympathies in personal messages instead of public announcements allowing breathing room for those that might not have heard the sad news? Or could that be associated to the horn blowers of the neighbourhoods as it was done a decade ago and sometimes still today? Could it be compared to the wailing and loud crying that we often see as each mourner enters the tents and homes before and after funerals? I wonder about all of these things and it just so happens that losing the one person ready to talk about all of this without prejudice is no longer talking. Which is why I wonder if we will ever be ready to talk about all of this and so much more in this regard.

Christine Yohannes Writes About Social Change, Performs At Public Events and Conducts Poetry Workshops in Schools. She Has Established a Monthly Event Entitled