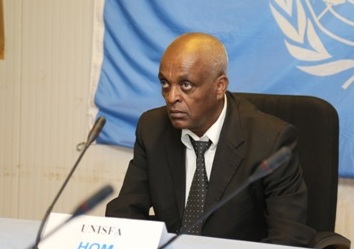 Addis Ababa (HAN) August 14.2016. Public Diplomacy & Regional Security News. Brigadier-General Haile Tilahun, who has been Head of Mission of the United Nations Interim Security Force for Abyei (UNISFA), has died at the age of 62 due to natural causes.

He was appointed as the Head of UNISFA by the United Nations Secretary-General Ban Ki-moon in January, 2015.

Brig Gen Haile, who served in various government posts, was among the founders of the Ethiopian Peoples’ Democratic Movement (EPDM).

The late Brig Gen Haile, has earned a master’s degree from the Open University in the United Kingdom.

Survived by three children, the funeral ceremony of Brig Gen Haile Tilahun will be held today at the Saint Trinity Cathedral.