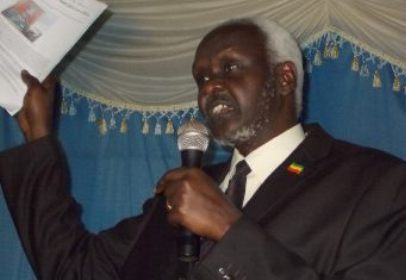 ADDIS ABABA (HAN) September 12.2016. Public Diplomacy & Regional Security News. A top leader of the rebel group of the Ethiopian Peoples Patriotic Front (EPPF) has decided to abandon his rebellion and joined the government after 25 years in exile.

Thowath Pal Chay, former governor of Gambella region of Ethiopia, has returned to the Ethiopian capital, Addis Ababa, and declared his comeback after leading unsuccessful rebellion for decades against the current Ethiopian government. He has been the chairman and commander in chief of the rebels’ coalition.

“We have decided to resolve our differences peacefully, to respect the constitutional order and to operate peacefully,” Chay told the national Ethiopian TV in the capital, Addis Ababa.

He made the remarks after conducting a meeting with the Ethiopian Prime Minister, Hailemariam Desalegn, on Thursday, to whom he personally declared the end to his rebellion.

It is not clear how many fighters the rebel leader has brought back with him as he has failed for decades to establish a strong rebel base in his home region. He however said he was working to bring back home his fighters from Eritrean and Sudanese borders.

Chay, an Ethiopian Nuer from the Gaajaak community which is the majority in the Gambella region, has been leading a loose coalition of rebel groups, including from different ethnic groups in the country.

He fled the country in 1991 when his former boss, Mengistu Hailemariam, was overthrown by the current government. Chay has been living in exile mainly in the Kenyan capital, Nairobi, or in Asmara, Eritrea, and has been touring the world to Australia, United States of America, and so forth.

He was known for being a powerful figure during the time of Mengistu where he was the governor of the former Illubabor region, combining the current Gambella region in the west, and parts of southern Ethiopia. He was also the top security officer for the Derg regime in the region.

The opposition leader was also a member of the highest national political organ in Ethiopia, the Central Committee and the Politburo of the Workers’ Party of Ethiopia (WPE) chaired by the former Ethiopian dictator, Mengistu, Hailemariam, who ruled the country from 1975 to 1991.

Chay has been known by the top leadership of the Sudan People’s Liberation Movement/Army (SPLM/A) for his role in the establishment of the movement in May 1983 as he was the top Ethiopian official who received late John Garang de Mabior across the border into Ethiopia.

He also handed over to the late Garang the military headquarters, Bilpam, located inside Ethiopia’s Gambella region, after dislodging from the area the Anya Nya 2 fighters led by late Vincent Kuany Latjor, a fellow South Sudanese Nuer.

It is not clear under which circumstances the former opposition leader has decided to return to the country after 25 years in exile, and without first signing an agreement with the government.

He was previously against the split of the country into Ethiopia and Eritrea in 1993 and also against the current Ethiopia’s federal system of governance which has divided Ethiopia based on ethnicities and nationalities.

It is also unclear whether or not he will legally register his opposition political party in Addis Ababa in order to “peacefully” pursue his party’s objectives, or join the current ruling party and take up a position in the government.