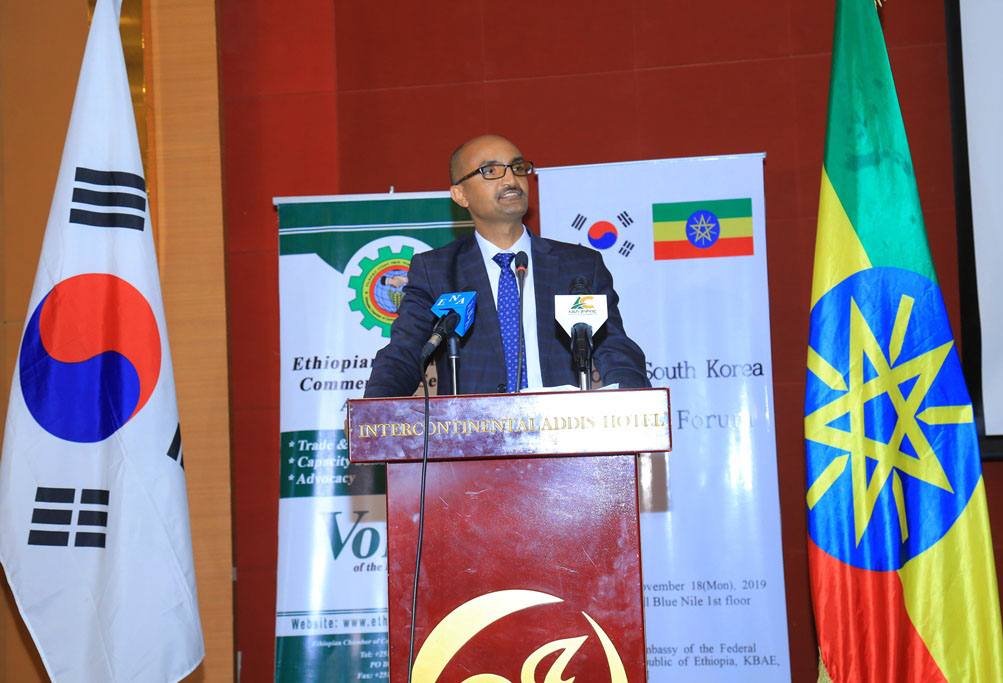 The forum, aimed at attracting FDI and strengthening business-to-business relations, was attended by more than 90 Ethiopian and South Korean companies.

Dr. Aklilu highlighted the special attention his Government has given to attracting foreign direct investment (FDI) and Ethiopia’s commitment to help foreign companies succeed in their investments in Ethiopia.

The State Minister invited South Korean companies to invest in agriculture, agro-processing, tourism, mining and ICT sectors together with their Ethiopian counterparts.

South Korean Ambassador in Ethiopia, H.E. Mr. Lim Hoon-min on his part said that South Korea and Ethiopia have a historical relation which dates back to the unforgettable contribution of the Ethiopian Defence Forces which fought as part of the United Nations Command during the Korean War.

The Ambassador also said Prime Minister Dr. Abiy Ahmed’s visit to Korea in last August was a testament to the growing relations between the two countries.

Expediting the implementation of the pending Investment Expansion and Protection Agreement between the two countries would be indispensable in attracting foreign investors, the Ambassador added.

According to President of the Ethiopian Chamber of Commerce and Sectoral Associations, Eng. Melaku Ezezew, although a trade deficit has been registered from the Ethiopian side, the balance of trade between the two countries has reached $1.8 billion in 2018.

Eng. Melaku said the two countries should create new investment and trade opportunities to scale up business ties and further bolster their relations.