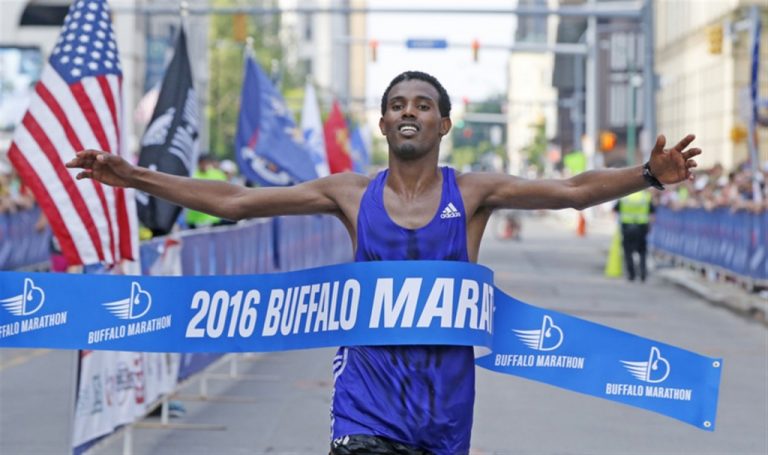 Senbeto Geneti Guteta made his debut in the Buffalo marathon a winning one Sunday.

The 23-year-old from Ethiopia crossed the finish line in a time of 2 hours, 22 minutes and 50 seconds to take home the $2,000 winner’s check in the 16th annual event. While he fell short of the marathon record of 2:15.50 set last year by two-time defending champion Kip Tisia, Guteta was elated with his performance on an unseasonably warm day.

“I’m very happy today,” he said after the win. “I’m working very hard. You have to plan to win, so I succeeded and I’m very happy.”

Guteta said the early start to the race – organizers moved the time up from 7 to 6:30 a.m. in an effort to combat the expected high temperatures – helped at the start, but that his pace slowed during the race.

“It was hot,” he said. “After 30 kilometers, especially. The course was very hard.”

On the women’s side, Hirut Guangul of Ethiopia defended her title in record-breaking fashion. After finishing in 2:39.1 in 2015, she shaved 35 seconds off that Sunday, crossing in 2:38.26.

“This year there was no wind,” Guangul said of what led to her improved time.

A field of about 1,930 runners took part in the marathon, with another 4,700 taking part in the half-marathon. The marathon continues to grow by about 10 percent each year, according to organizers.

Race director Greg Weber said that several runners had been treated for heat-related issues like dehydration and cramping, but that he was not sure if anything more serious had taken place on the course. The finish line in front of the Buffalo Convention Center had a medical station next to it, and several runners were taken there immediately after they crossed.