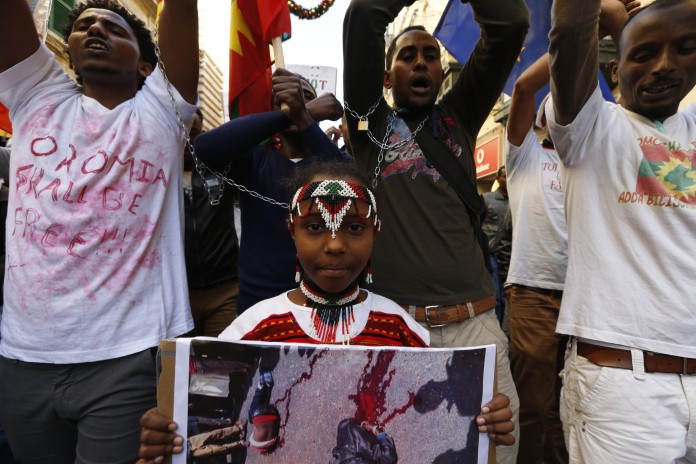 NAIROBI (HAN) April 4. 2016. Public Diplomacy & Regional Security News. By Degeufe Hailu. “Nations cannot realise the full promise of independence until they fully protect the rights of their people,” Barrack Obama, president of the United States, said on tour to Kenya and Ethiopia last year. This is ironic, because on that trip he failed to criticise human rights abuses by the Ethiopian government, which he hailed as “democratically elected”.

Ethiopians are very familiar with the government’s attempts to oppress any opposition. The Tigrayan People’s Liberation Front (TPLF) government took power in 1991. All opponents are persecuted as terrorist collaborators.

Today, Ethiopia stands as a nation in contempt of human rights. According to the Committee to Protect Journalists, Ethiopia has the second highest number of journalists forced into exile between 2010 and 2015 after Syria.

Evidence of the denial of freedom of expression includes the arrest and incarceration of Zone 9 bloggers in 2014. Their name is a reference to the eight divisions of the infamous Kaliti Prison — suggesting that Ethiopia as whole is effectively the jail’s ninth division. The arrest of the bloggers for publication of news and opinion pieces that were critical of the government and its repressive entourage exposed the country’s non-existent due process.

Last June, Andargachew Tsige, the secretary-general of Ginbot 7, a group banned for allegedly advocating the armed overthrow of the Ethiopian government, was deported to Ethiopia from Yemen while in transit to Eritrea. This transfer violated international law prohibiting sending someone to a country where they are likely to face torture.

Tsige has been detained without access to family members, legal counsel or consular representation, which he is entitled to as a British citizen. His detention location, to date, is unknown.

Terrorising those who publically criticise the government’s endeavours, however, is not limited to media outlets. In April 2015, peaceful protests in Oromia over the government’s planned expansion of the Addis Ababa municipal boundary were met with excessive force, including shootings. Many protesters perished, while others continue to be detained without charge.

Protest against displacement from land and family is not new to Ethiopia.

Under the “villagisation program” 1.5 million rural people have been relocated under the guise of improving their access to basic services. One example of this forced displacement is in the Gambella region, for which relocation was accompanied by insufficient compensation and consultations, and violence including beatings and arbitrary arrests. This was just in the first-year of the “villagisation program”.

In subsequent years, 200,000 indigenous persons from 240,000 hectares of land in the lower Omo Valley were displaced without compensation or consultation, due to the government’s development of sugar plantations. The clearance of land, sold to foreign interests, year-in year-out has lined the pockets of the government, without regard for the region, or the Ethiopian people in general.

Inherent in this inculcating of terror, is the need to maintain the status quo. This is evident in the landslide victory in June 2015 of the ruling party and its insipid allies. The Ethiopian People’s Revolutionary Democratic Front, a rebrand of the TPLF, overwhelmingly ejected the only opposition parliamentarian from office.

“This result was completely expected, there is no multi-party system in Ethiopia. It’s just fake,” said Taye Negussie, a sociology professor at Addis Ababa University.

President Obama’s visit to Kenya and Ethiopia was to whitewash a continent.

US collaboration with the TPLF, a party that has expelled all opposition and is dedicated to a reign of pure terror, has a long history — Obama and three of his predecessors have visited.

The people in the Horn of Africa can live in harmony and in peace, and flourish through the development of a stable region, without the need for foreign interference.

The mission to oust the oppressive regime in Ethiopia, is aimed to stop a culture of fear and suspicion, especially if we want to enter into a serious problem-solving dialogue.

We need to be united participants of the political process and not the subjects of a repressive and terrorising government, to address our problems genuinely and solve them definitively.