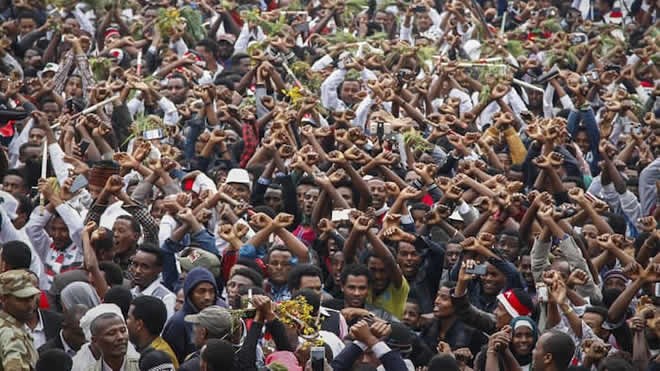 Ethiopian anti-government protesters are escalating attacks on foreign investors as anger grows over the regime’s crackdown on demonstrations, in which hundreds of people have been killed.

Activists torched a Turkish textile factory and attacked a mine owned by Aliko Dangote, Africa’s richest man, damaging trucks and machinery on Tuesday, days after more than 50 people were killed when police fired tear gas and rubber bullets to disperse protests at a religious festival. The US embassy in Addis Ababa said an American woman died on Tuesday when her vehicle was struck by rocks thrown by Ethiopians on the outskirts of the capital.

The violence comes after a wave of protests this year that were originally triggered over a land dispute in the Oromia region of central and southern Ethiopia. They have since escalated into broader demonstrations against the autocratic government and spread to other regions, threatening the stability of one of Africa’s best-performing economies.

Addis Ababa has responded with force — activists accuse security forces of firing live ammunition on unarmed demonstrators and say hundreds have been killed in the protests.

Washington has called the government’s approach to the unrest “self-defeating,” while the EU on Wednesday called for the authorities to address the “wider aspects of the grievances”.

Activists and analysts say the attacks on foreign firms are becoming increasingly co-ordinated.

More than two dozen foreign companies, including flower farms and other agribusinesses have suffered millions of dollars in damage in recent weeks, according to Verisk Maplecroft, a UK-based consultancy.

Juan Carlos Vallejo, co-owner of Esmeralda Farms, pulled out of the country after his business was attacked several weeks ago.

“Right now, everyone is really scared,” he said. “We never expected something like this to happen. I don’t think anyone is going to want to invest here any more.”

Ethiopia has been one of Africa’s star performers, recording 10 per cent annual growth and attracting tens of billions of dollars in foreign investment over the past decade thanks to a carefully planned, state-led development and industrialisation policies. 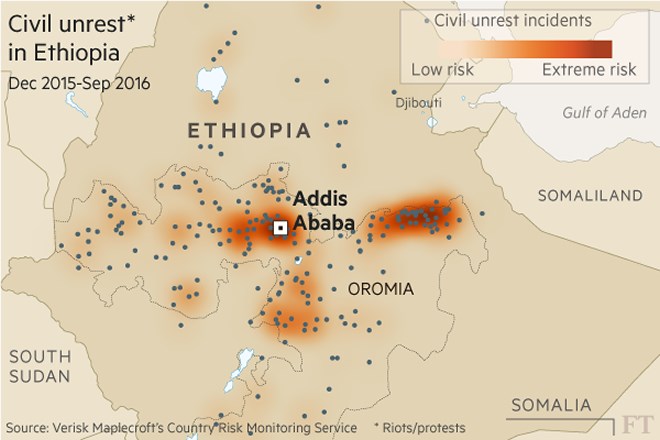 But it is also a tightly controlled society, with the Ethiopian People’s Revolutionary Democratic Front — which has governed with an iron grip since 1991 — and its allies controlling all the seats in parliament.

Dissent is swiftly repressed and the political opposition was severely weakened by a government crackdown — during which scores of people were also killed — after disputed 2005 elections.

“We have made clear that Ethiopia’s prosperity depends on the ability of its government to maintain a stable and predictable investment climate and to expand political space,” a western diplomat said.

The current protests began in Oromia region last November over plans to expand Addis Ababa into Oromo lands. The initiative was shelved but the government’s aggressive response to the protests saw them spread to northern areas, which are dominated by the Amhara ethnic group.

Both the Amhara and Oromo are frustrated by the political dominance of the Tigray minority, which makes up 6 per cent of the 100m population, analysts say. The Oromo and Amhara comprise some two-thirds of Ethiopians.

Awol Allo, an Ethiopian law lecturer at Keele University, said foreign investors were being targeted because “they are seen as the source of legitimacy for the government.”

“The government has to attract foreign investment to keep the economy growing and has to provide land and services cheaply,” he said. “People are taking out their anger on investments by foreigners to undermine the government.”

The government has sought to play down the protests, blaming overseas agitators and criminal elements.

Analysts say the Tigray-dominated regime has maintained its grip in part by keeping the larger ethnic groups divided. But they add that now the Oromo and Amhara have united in their opposition to the government, it will be hard for the authorities to appease them without making significant concessions.

However, Rashid Abdi, an analyst at the International Crisis Group, said some ministers, and the Tigray-controlled military, are loath to do this.

“The protests have now reached a serious level, a different scale,” he said. “We should not exaggerate and say the government is going to keel over tomorrow, but it portends future trouble unless they get a grip. What’s worrying is that so far they haven’t.”