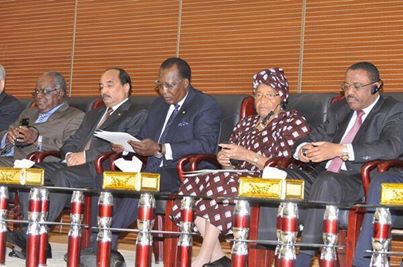 Ndjamena (HAN) The High Level Committee of Heads of State and Governments on the Post 2015 Development Agenda held a meeting yesterday(February 28,2013) in Ndjamena, Chad. The Meeting which was chaired by President Ellen Sirleaf Johnson of Liberia was and Mohaamed Ould Abudulaziz, President of Mauritania and Current chairperson of the African Union was attended by Prime Minister Hailemariam Desalegn, President Idris Deby of Chad, Hifikepunye Pohamba of Namibia, Abdelmaek Selalal , Prime Minister of Algeria , Dr. Dlamini Zuma Chairperson of The African Union Commission and representatives of Guinea, Congo, South Africa and Mauritius. The meeting was called pursuant to the African Union Head of States and Government decision on the 31st of January, 2014. The Assembly decided that the committee should hold a meeting before June,2014 to include peace and security as the sixth pillar of Africa’s Common position on 2015 development Agenda. Accordingly, Structural economic transformation and inclusive growth, science, technology and innovation, human-centered development, environmental sustainability, natural resources management and risk management of natural disasters, finance and partnership and peace and security were adopted as the six pillars of Africa’s Common Position. Highlighting the importance of the sustainable development goals, Dr. Dlamini Zuma noted that “the MDG’s were sufficient condition to tackle poverty but not critical “hence the Sustainable Development Goals. The Committee further discussed on ways to strategize in advocacy , negotiation and forging alliances to ensure Africa’s common position to ensure that Africa’s common position is well taken in the Rio 2015 Summit on formulation of the post 2015 development goals .The committee also heard report of the coordinating committee for post 2015 development agenda of the African Union Commission . Carlos Lopez’s ,Executive Secretary of UNECA in his report explained the challenges Africa may face in the negotiations for the Sustainable Development Goals due to its nature that it is crafted both for developing and developed countries. Citing the sticky manner of climate change negotiations, he stressed on the need to develop winning strategies. Amina J. Moahmmed Special Assistant to UN Secretary General lauded the adoption of Africa’s common position on the post 2015 development agenda. She noted issues of identifying finance source other than Official Development Assistance for post 2015 development goals and stressed the need to work on system of accountability as the goals are not legally binding. African union Commission Commissioner for Economic affairs Anthony Mothae Maruping presented strategies for cross –regional alliances and advocacy of Africa’s common position. The Committee decided to continue working on strategies for negotiation, advocacy and forging alliances and to meet before the upcoming AU summit which will be held in Malabo.