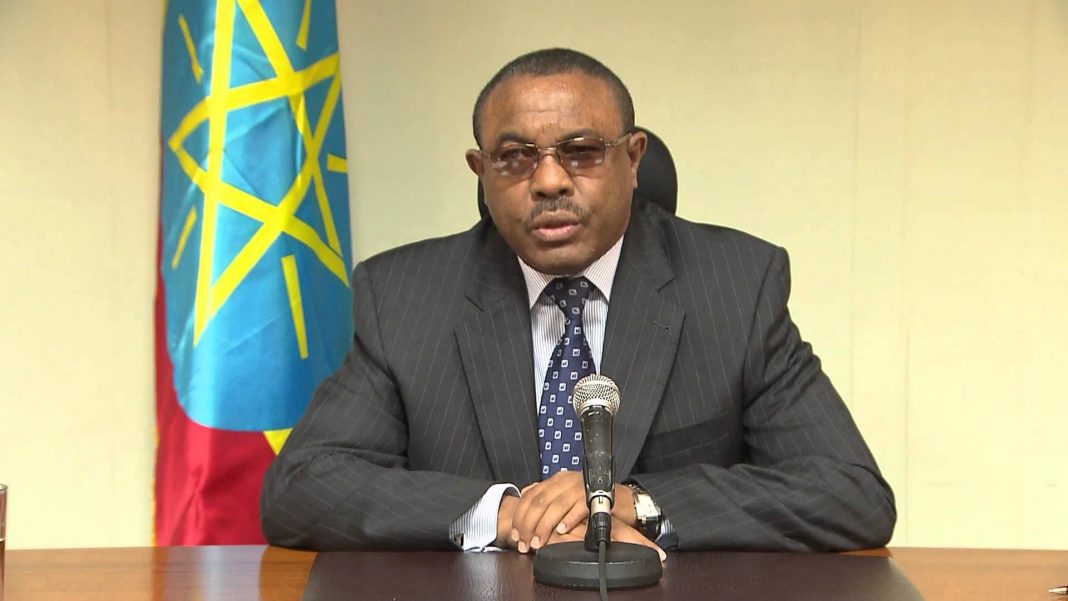 ADDIS ABABA (HAN) January 6.2017 Public Diplomacy & Regional Security News. By Tesfa-Alem Tekle The Ethiopian Prime Minister, Hailemariam Desalegn said on Monday that his country will not free a prominent opposition leader from the restive Oromia region being jailed under the state of emergency decree.

The Chairman of the Opposition Oromo Federalist Congress (OFC) party, Merara Gudina, was arrested last month upon return from a meeting with European Union (EU) lawmakers in Belgium.

In Brussels, Merara appeared at the EU parliament to testify on the recent political crises and reports of alleged human right violations in the horn of Africa’s nation.

Merara appeared at EU Parliament along with Birhanu Nega, leader of Ginbot-7, an exiled opposition movement long branded by Ethiopia as terrorist entity.

Also present at the EU Parliament was Feyisa Lellisa, Ethiopian Olympic Athlete who staged a protest sign at the Rio Olympics when he came second in a marathon race.

Ethiopian officials told Sudan Tribune Tuesday that the opposition leader was arrested for trespassing the state emergency ruling. Ethiopia imposed a six-month state of emergency in October following months of deadly protests in parts of the country.

The country faced an unprecedented wave of protests mainly in Oromia and Amhara regions over territorial as well as wider political and economic rights.

The decree’s directive Article-2 prohibits any individual from communicating with banned opposition organisations or other “anti-peace” elements.

However, the Ethiopian Prime Minister on Monday said his country would not release the prominent opposition leader, but rather allow him face the courts of law.

“Individuals in EU Parliament who are harbouring anti-peace elements can’t save those who trespass the law of the country”, Hailemariam told reporters.

Opposition officials today told Sudan Tribune that Merara is likely to be tried under the country’s anti-terrorism law, which right groups allege is being used as a tool to stifle freedom of speech and to arrest opposition members and critical journalists.

Right groups have also said that the decree has affected freedom of expression, dissent and independent reporting.

Ethiopian authorities have arrested over 20,000 suspects since the decree was declared last October in a bid to arrest violence.

The state emergency set to end in May is Ethiopia’s first in over quarter a century.

The Ethiopian Prime Minister said the state of emergency decree has brought calm and could be lifted, considering the gains it had so far achieved.

“As far as the date of lifting the state emergency is concerned, it should be seen in the perspectives that we have to consolidate the gains that we have made so far” he added, but did not hint on whether his government would extend the decree after its end.