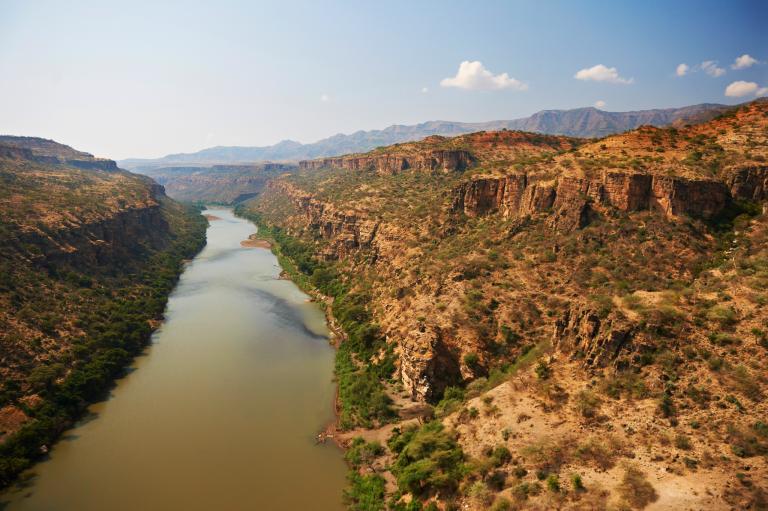 ADDIS ABABA (HAN) July 30.2016. Public Diplomacy & Regional Security News. BY:Kieran Cooke. It’s like negotiating the rules of engagement long after the contest has been held and the winner declared.

Egypt is deeply worried about the impact on its water supply of a dam being built by Ethiopia far to the south, on the Blue Nile.

At a meeting with his Ethiopian and Sudanese counterparts last year, Egyptian President Abdul Fattah al-Sisi reiterated his country’s concerns while, at the same time, signing what was termed a “declaration of principles” about how the multi-billion dollar scheme – one of the world’s biggest infrastructure projects – should be implemented.

Whatever principles have been agreed on – and these seem rather vague – the project is going ahead. Work on what’s grandly named the Great Ethiopian Renaissance Dam, or GERD, is now more than 70 percent complete. The dam, which will eventually produce 6,000 megawatts of electricity according to its backers, is scheduled to start operations next year.

Ethiopia sees the dam as vital to lifting a large segment of its more than 80 million people out of poverty. It also has ambitions to turn itself into “The powerhouse of Africa” by selling energy produced by the project.

Successive Egyptian administrations seem to have been caught by surprise by Ethiopia’s determination to implement the GERD. The fact that the project is progressing – and has won the support of many of Egypt’s neighbours to the south – is also seen as an indication of Cairo’s waning influence in Africa.

Any development which might interfere with the flow of the Nile waters is of great concern to Egypt. Most of its more than 80 million people live within a few kilometres of the river.

The river supplies the bulk of the country’s drinking water and irrigates the Nile Delta, one of the most fertile regions on the planet. Any drop in the level of the Nile as a result of developments upstream could seriously affect water supplies, already under severe pressure.

The Nile also generates about half of Egypt’s electricity through the operation of the Aswan High Dam, built in the 1960s with the help of the Soviet Union.

There are worries that water levels in Lake Nasser – the more-than 5,000 square-kilometres man-made lake which feeds into the Aswan High Dam – could be lowered by the operation of the Ethiopian dam. This would result in less hydroelectric power being produced at Aswan. Many areas of Egypt are experiencing significant power shortages.

“The Renaissance Dam project represents a source of development for the millions of Ethiopia’s citizens through producing green and sustainable energy,” said Sisi last March.

“But for their brothers living on the banks of the Nile in Egypt, and who approximately equal them in numbers, it represents a source of concern and worry. This is because the Nile is their only source of water, in fact their source of life.”

Another Egyptian concern is that Ethiopia has not, from Cairo’s point of view, been open about how the GERD will be operated – how much water might be extracted from the waters of the Blue Nile – one of the Nile’s main tributaries – and how much and by what means electric power from the dam will be transmitted to neighbouring countries.

Relations between Cairo and Addis Adaba over the GERD project sunk to a low in mid-2013 when a group of Egyptian politicians was heard on TV advocating military action over the Ethiopian dam.

Mohamed Morsi, then Egypt’s president, struggled to calm the atmosphere by saying he did not want war – but added that “Egypt’s water security cannot be violated at all”. Meanwhile, Ethiopia accused Egypt of trying to sabotage the GERD by seeking to dissuade international financial institutions from lending to the project.

In recent years, relations have improved though Ethiopia has repeatedly said there can be no question of halting or revising its mega dam project.

A team of French consultants has been appointed to look into some of the issues associated with the dam’s construction, but its final report is unlikely to be published until well after the scheme begins operating.

The management of the Nile, the world’s longest river, flowing through 10 countries from its sources in the highlands of Ethiopia and central Africa, is a complex issue.

Under treaties dating back to the days of the old British administration in the region, only Sudan and Egypt have the right to the use of Nile waters, with Egypt receiving the major share.

Ethiopia – with its fast growing economy increasingly seen as a rival to Egyptian influence in the area – does not recognise these old agreements and has gained support for a new framework governing the Nile. It also insists it can do as it pleases with the waters of the Blue Nile, which for the most part flow through its territory.

There are many in Egypt who are sceptical about Ethiopian claims that the GERD  – being built by the Italian Salini impregilo company – will “not cause any harm to downstream countries”.

They point out that Egypt’s own experience with the Aswan High Dam has not been encouraging. When it was constructed, Aswan was considered to be a miracle of modern engineering.

While the dam has generated power and prevented large scale flooding in many areas, it has in many ways created more problems than it has solved.

As a mechanism for managing the river, it is grossly inefficient. About 15 percent of the water which gathers in Lake Nasser is lost to evaporation. Prior to the dam being built, silt from the Nile fertilised the delta. Now farmers use fertilisers on their crops and there are major chemical pollution problems.

Due to water being held back by the Aswan, fresh water never reaches some coastal regions and the absence of silt means the whole region is sinking. The Mediterranean is encroachingin many areas: increased salt levels on land are a big problem.

Meanwhile, further south in Ethiopia, 9,000 workers are labouring round the clock in order to finish the GERD project on schedule. Despite all its concerns, Egypt is powerless to stop the construction of what will be Africa’s biggest dam.

– Kieran Cooke is a former foreign correspondent for both the BBC and the Financial Times, and continues to contribute to the BBC and a wide range of international newspapers and radio networks.

The views expressed in this article belong to the author and do not necessarily reflect the editorial policy of Middle East Eye.

Photo: A ferry crosses the Nile River at sunset in the southern Egyptian village of Nagaa Hammadi (AFP).