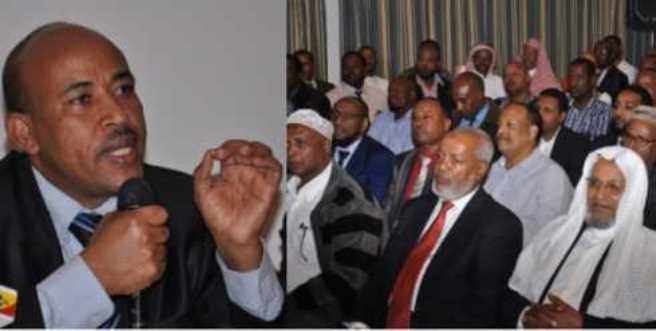 Minister of Defense, Siraj Fegessa met with Ethiopian nationals and foreigners of Ethiopian origin from Riyad, Jeddah, Mecca, Medina, Jizan, Kamis Mushait, Taif and other parts of Saudi Arabia, in Riyad on Monday (November 21, 2016), during which members of the Diaspora pledged to contribute their share to Ethiopia’s development endeavors.

On the occasion, Defense Minister Siraj Fegessa briefed members of the Diaspora on the progress made in areas of peace, development and democracy as well as the state of emergency. The Minister highlighted the hard work exerted by the government in conjunction with the private sector and the people at large, and took note of the achievements in store with regard to improving the livelihood of the peoples of Ethiopia.

Touching upon current affairs in Ethiopia, particularly on the gains made following the declaration of the state of emergency,   Siraj underscored that the State of emergency is restoring the peace the country had long enjoyed, adding that the government has yet to give quick response to demands raised by the people and focus on justice.

Members of the Ethiopian Diaspora on their part further pledged to advance their contribution to the construction of the Grand Ethiopian Renaissance Dam (GERD) and other ongoing development programs.