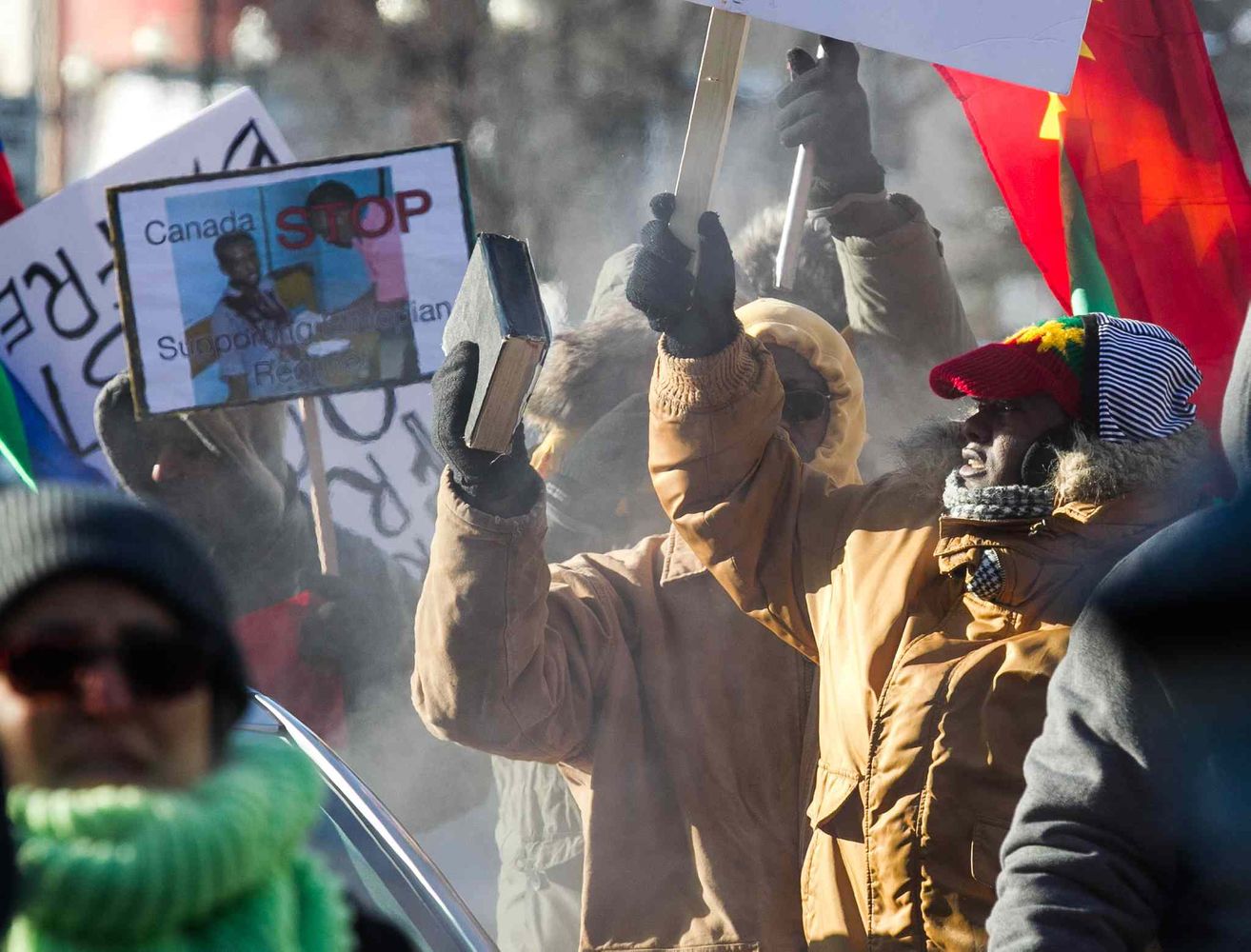 WINNIPEG (HAN) August 20.2016. Public Diplomacy & Regional Security News. Approximately 100 members of Winnipeg’s Ethiopian community rallied outside the Legislature Friday in trying to get Canadian political power to step in and stop human-rights violations in their homeland.

Similar protests took place around Canada after protesters in the Oromia region of Ethiopia were killed by government security forces in recent weeks and months.

The Ethiopian government was elected in a controversial election in 2015 and soon made plans to expand the capital region of Addis Ababa into neighbouring towns, a movement that Oromo people believed would displace farmers in their state.

When residents protested, government forces reacted with force, killing upwards of 400 people, according to Human Rights Watch. Those protests have continued and, according to Amnesty International, 97 people were killed earlier this month when forces “fired live bullets at peaceful protesters.”

Muleta Hunduma, whose brother was kidnapped and is feared dead, said the Canadian government needs to use its diplomatic relation with Ethiopia to affect change there.

“What we are saying is ‘When you are sending money, just use that as leverage for human rights,'” Hunduma said. “They are killing so many innocent people, children. … We are hoping the Canadian government will listen to our concern and do their own research.”

Berhanu Balcha, a physician who has been in Winnipeg for 32 years, and Eshetu Beshada, who has lived here for 12 years, both have deep family roots left behind in Oromia, the most populous region in the nation.

“I do have a lot of concerns for my family, my extended family, my friends and so on,” Beshada said, “because the government itself is not anymore representing the people.

“The Canadian government considers this government as democratic. This is wrong. The truth and the fact is they’re not democratic, they’re killing their own people.”

Balcha fears if the persecution isn’t stopped now it could escalate to a level on par with other human-rights atrocities in African nations like Rwanda and Congo.

“We need Canadian pressure and other international government pressure because if this thing is not put into checks now it may get out of hand and would be like other massacres that have been in Africa,” he said. “… We want to have a peaceful, democratic government in the country and yet this (Ethiopian) government doesn’t want to accommodate the majority of the population.”

The government has also restricted access to social media, leaving those outside the country to provide their voice, Balcha said.

“I’m a Canadian, born in that country, so I feel the duty to speak up for those people who cannot,” he said.