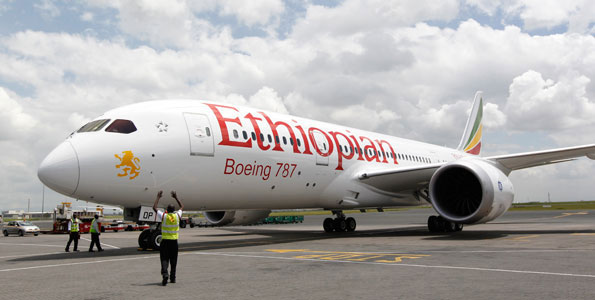 Dakar (HAN) December 8, 2015– Public Diplomacy and Regional Stability Initiatives News. An aircraft belonging to the Ethiopian airlines is grounded at the Leopold Sedar Senghor International Airport in Senegal after it escaped an accident.

Twice, the aircraft taxied and took off successfully, but subsequently made two emergency landings at the airport.

Media reports quoted the airport authorities as saying that the pilots of the aircraft had complained of technical difficulties mid air as the flight lost altitude.

After the first emergency landing, the pilots complained that one of the wings of the aircraft had developed a fault.

This happened almost 45 minutes after the flight had taken off for Addis Ababa via Bamako in Mali.

“When we noticed that the flight was not attaining the normal altitude, we thought that was the end of us,” one passenger was quoted by the Sud Quotidien newspaper.

The fault was repaired and the aircraft took off again with 139 passengers on board.

But in a space of 15 minutes, the flight was forced to make another emergency landing and has since been grounded.

Ethiopian Airlines officials at the Dakar office remained tight-lipped on the matter, insisting that all inquiries be directed to the Leopold Sedar Senghor International Airport office.

The office could not be accessed easily due to tight security controls.

Ethiopian Airlines and Kenya Airways are renown for their leadership and reliability in the West Africa air transport sector.

The two companies have regular flights connecting several countries of the region and thereby replacing national carriers since over a decade.