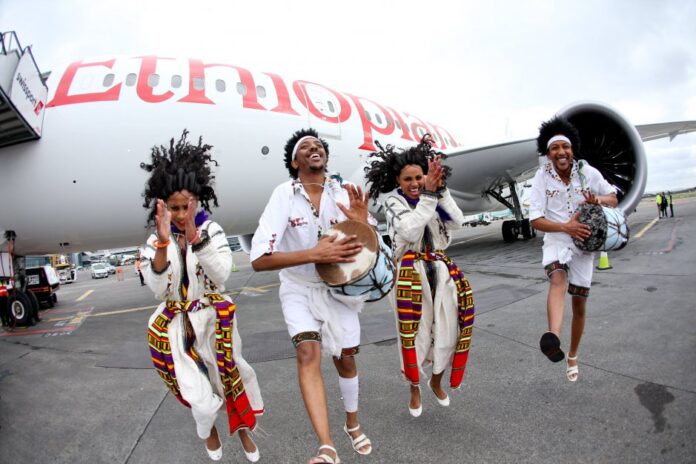 ADDIS ABABA (HAN) April 11. 2016. Public Diplomacy & Regional Security News. Ethiopian Airlines has begun celebrating its 70 years of dedicated and highly successful air transport services to, from and within the continent of Africa as of April 08, 2016. A press release issued yesterday stated with its strong mission of bringing Africa together and closer to the world, Ethiopian has expanded much needed air connectivity within Africa and with the rest of the world in the last 70 years. Leading the way in the past, present and the future; Ethiopian has been an aviation technology leader in Africa and has introduced many new aircraft and systems to the continent. The result of such a long journey of dedicated service has now culminated in connecting 51 cities in Africa with the major trading centers of the world in five continents and 41 cities around the world.

It said, every single day, the airline is operating 240 flights with an efficiently designed network of connectivity through our main hub in Addis Ababa with 76 aircraft in service. Along with our Star Alliance partners, we cover the entire world. The fast, profitable and sustainable growth it has registered in the last 10 years has made the carrier the largest, most profitable and fastest growing airline in the African continent. It operates Africa’s largest cargo service, largest and most advanced Aviation Academy and best MRO services.

Group Chief Executive Officer, Tewolde Gebremariam, said “Seventy years is a long time, but Ethiopian is still young, strong, forward looking and ready to contribute its own share of an integrated, prosperous and peaceful Africa, driven by its own citizens and representing a dynamic force in the global arena in line with the African Union agenda 2063. ”

“The billions of dollars we invested in our modern fleet, aviation infrastructure, human resource development and operating systems are a testimony that shows Ethiopian is positioned in a solid foundation to scale up the growth in its Vision 2025. With the next generation advanced fleet of B-787 Dreamliners, Airbus A-350 and the B-737 MAX, we are very excited to continue to lead the 21st century aviation development in the continent of Africa,” he added.

Ethiopian Airlines (Ethiopian) is the fastest growing Airline in Africa. In its seven decades of operations, Ethiopian has become one of the continent’s leading carriers, unrivalled in efficiency and operational success.

Ethiopian commands the lion’s share of the pan-African passenger and cargo network operating the youngest and most modern fleet to 92 international destinations across five continents. Ethiopian fleet includes ultra-modern and environmentally friendly aircraft such as the Boeing 787, Boeing 777-300ER, Boeing 777-200LR, Boeing 777-200 Freighter, Bombardier Q-400 double cabin with an average fleet age of five years. In fact, Ethiopian is the first airline in Africa to own and operate these aircraft.