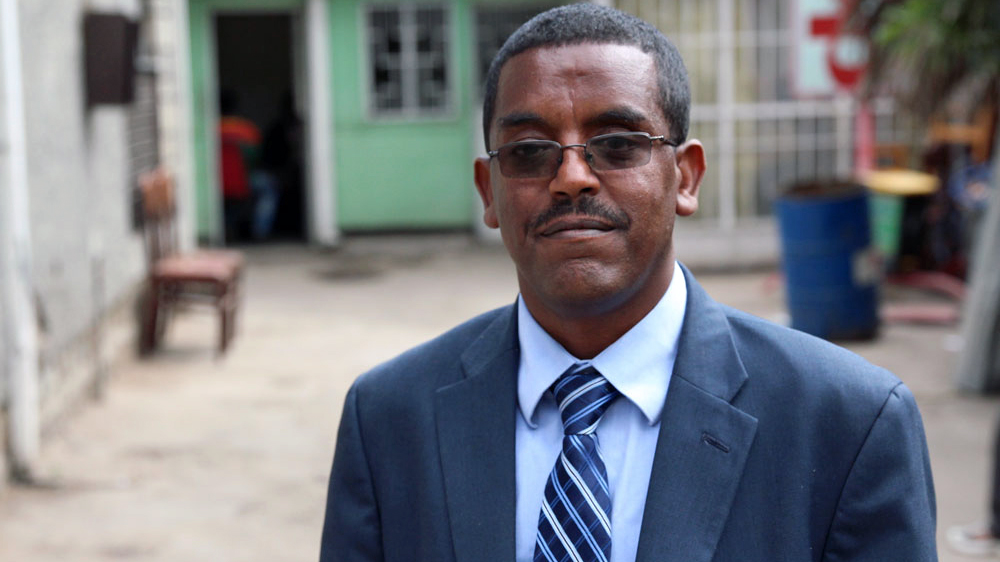 OTTAWA (HAN) July 30.2016. Public Diplomacy & Regional Security News. By E. Akele. The chairman of the Blue party, Mr. Yilkal Getnet, has concluded his three weeks-long tour in Canada and travelled to the US last week.  During his stay in Canada, Mr. Getnet met several party supporters and held fruitful and inspiring discussions. In addition, he reached out to several members of the Ethiopian Diaspora during and in the aftermath of the 33rd tournament of Ethiopian Sports Federation in North America (ESFNA).

During a dinner hosted in his honour, Mr. Getnet briefed Ethiopians and stated that the current situation in the country needed the participation of all Ethiopians and the struggle to democratize Ethiopia should not be left to the political parties alone.  Further, he stressed the need to have a wider dialogue among the citizens to build a political consensus as well as strong activism for the respect of human and democratic rights. As the country itself is at critical juncture, the participation of all is greatly needed to bring about sustainable democratic change.  It is only a country capable of accommodating the fundamental needs of its citizens that could have the potential to survive the current political, economic and social resentments from its diverse peoples.

Mr. Getnet met with senior officials of the Ministry of Foreign Affairs of Canada in Ottawa on July 13, 2016 where he discussed the political situation in Ethiopia including the ongoing turmoil in Gondar. Mr. Getnet indicated to the officials that Canada should use its leverage to influence political change in Ethiopia. On separate occasions, he met two Members of Parliament and held very candid and encouraging discussions regarding the current political situation in Ethiopia and its implications to the Horn of Africa and beyond. Mr. Getnet extensively informed Canadian officials regarding the current political and economic situation, the challenge of peaceful struggle and the growing tendencies of the government of Ethiopia to introduce new laws that criminalize blogging and online political activism. For example, he mentioned the newly drafted cyber law put undue pressure on online blogging which might be misinterpreted as an act of terrorism.

At a farewell meeting he had with the organizers of his trip, Mr. Getnet mentioned that the outcome of his meeting with senior officials was very productive and achieved its intended results. He further explained “the officials of the government of Canada expressed their grave concerns over Ethiopia’s handling of human rights, restrictions of freedom of expression and their interference in free speeches and publications, and the use of draconian legislations to stifle dissent which is jeopardizing the opportunity to democratic transformation of the nation.”

Mr. Yilkal shared his understanding that from the discussion he had with the officials, the major donor countries have long realized that the Ethiopian government is using the anti-terrorism law to arrest and persecute those who oppose it. As a partner in development, they also want to see their aid have positive changes in the areas of basic democratic and human rights. At a different level, Canadian officials have raised their concern to Ethiopian authorities. Although progress is slow they underlined that the influence of donors could have a positive impact in the future and stated their commitment to continue such influence through the monitoring of aid effectiveness and through other bilateral forums whenever possible.

While in Toronto Mr. Yilkal Getnet has also established the Canadian branch of Semayawi Party Support Committee (SPSC – Canada) that works as a focal point to expand the advocacy and support of the Blue Party in Canada. The committee, which is composed of five individuals, will work in collaboration with other registered non-profit organizations engaged in work encompassing human rights and democracy in Canada. He thanked Ethiopians who attended the event and solemnly confirmed to them that the Blue party and its members are determined to continue to fight for their beliefs and the struggle of their people despite harsh treatments until a political system that genuinely represents the interest of all Ethiopians is established.

Mr. Getnet stated that each and every move towards democracy in a dictatorial regime has taxed high prices and reiterated that the party has been paying dearly for those sacrifices.  Several young Ethiopians and members of the Blue Party are currently suffering in jail for no crimes committed other than speaking and writing about the truth. Yonatan Tefaye and Getachew Shifreaw, are two prominent examples. He concluded the briefing by saying “until we hold collectively the government to be accountable to the people these arbitrary detentions, torture and extrajudicial killings will continue”. Therefore, he proposed in order to “end Government impunity all should stand together and work in unison to see a democratic Ethiopia.”

One of the organizers of Mr. Getnet’s visit to Canada, Mr. Tekelemichael Abebe, a lawyer and human rights activist in Toronto, accompanied the Chairman to his meeting with the Ministry of Foreign Affairs in Ottawa and the Member of Parliament for Beaches East York, Mr. Nathaniel Erskine-Smith. Furthermore, Mr. Negussie Adamu, an activist and resident of Barrie, a suburb of Toronto has accompanied Mr. Getnet in his meeting with the Member of Parliament for Barrie, Mr. Alex Nuttall.  Correspondingly, the Unity for Democracy and Human Rights (UHRD), a Toronto based charity working on human rights has sponsored his visit.

Subsequently, Mr. Esayas Teshome, the General Secretary of Unity for Democracy and Human Rights and Teklemichael Abebe have expressed their satisfaction regarding the outcome of the visit and the work done in terms of human rights and democracy. Teklemichael said “such kinds of visits are important for several reasons; they are useful to create opportunity to meet the Ethiopian Diaspora and raise awareness in Canada about the human rights violations in Ethiopia.” For example, because Canada recognizes the worsening human rights condition, it has made a policy change that exempts Ethiopian refugees from the one year bar to apply for Pre-Removal Risk Assessment (PRRA). Normally, individuals whose applications for refugee protections are rejected, abandoned or withdrawn, may not apply for a PRRA unless at least 12 months have passed. Since refugees are removed from Canada before the 12 months period expires, they would not have the chance to apply for PRRA in the past. However, understanding the ever-growing gross human rights violations in Ethiopia, Canada has this week changed that policy for Ethiopian refugees whose applications were rejected over the last one year and those Ethiopians are now exempted from the 12 months waiting period to apply for PRRA. That is a major victory for refugee and human rights lawyers, Teklemichael said.

Mr. Getnet held two successful fundraisings and public meetings in Ottawa as well as in Buffalo, New York. Mr. Getnet left Canada for the US last week. He was affectionately seen off by party enthusiasts. He proceeds to the United States to meet senior US officials as per his schedule set by the Semayawi Party International Support Committee in the United States. He will also have a major public meeting on the weekend of August 6/7, 2016 in Washington, DC alongside fellow party leader, Professor Merera Gudina of Medrek.