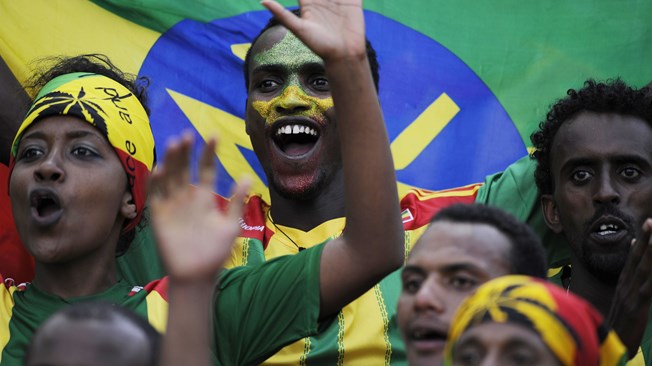 Addis Ababa (HAN) October 11, 2015 – Geeska Sports News. –Ethiopia won, Kenya drew and Tanzania lost in 2018 FIFA World Cup Russia™ qualifiers as they secured second-round places with aggregate victories.A first-minute goal helped Ethiopia to a 3-0 second-leg win over Sao Tome e Principe in Addis Ababa and a 3-1 overall success after suffering a shock first-leg loss. Kenya were booed by increasingly frustrated supporters in Nairobi as woeful finishing by the hosts allowed Mauritius to escape with a 0-0 draw having crumbled 5-2 at home last Wednesday. Tanzania conceded a late first-half goal to lose 1-0 in Malawi, but progressed thanks to a 2-0 victory in Dar es Salaam four days ago.

Ethiopia face Congo, Kenya meet Cape Verde Islands and Tanzania play top-ranked African team Algeria during November in a second home-and-away qualifying round. Another ten second-leg fixtures are scheduled for Tuesday after which there will be 40 African contenders left for five places at the World Cup in Russia. The top 27 ranked African teams when the draw was made in Saint Petersburg three months ago received first-round byes, including Algeria and CAF Africa Cup of Nations title-holders Côte d’Ivoire.

Tanzania dominated the first leg against Malawi and could have won by more than the two goals Mbwana Samata and Thomas Ulimwengu scored. But the Taifa Stars were soon on the defensive at the Kamuzu Stadium in Malawi commercial capital Blantyre with Ally Mustafa making several reflex saves, and the post coming to his aid. The goalkeeper had no chance of preventing the Flames taking the lead after 43 minutes, though, when a deflected John Banda shot looped into the net. Malawi dominated second-half territory and possession and Banda came close several times to snatching a second goal that would have taken the tie to a penalty shootout.

Kenyan supporters went to the Kasarani Stadium expecting to see the Harambee Starsscore goals after an unexpectedly easy 5-2 away win over the Mauritians. However, a string of brilliant saves from man-of-the-match Kevin Jean-Louis, the woodwork, and some woeful finishing resulted in a goalless second leg. Discontent among the crowd reached a peak after 73 minutes when Kevin Amwayi blazed a half-chance over the crossbar and calls for his substitution were heeded soon after.

Sao Tome created the biggest shock of the first legs by snatching a late 1-0 victory over Ethiopia, but surrendered that advantage when Dawit Fekadu scored within 60 seconds of the return game. Gatoch Panom converted an early second-half penalty to put Ethiopia two goals ahead on the day and one in front on aggregate. Ramkel Lok made the tie safe for the Ethiopians with a third goal 15 minutes from time at Addis Ababa Stadium.