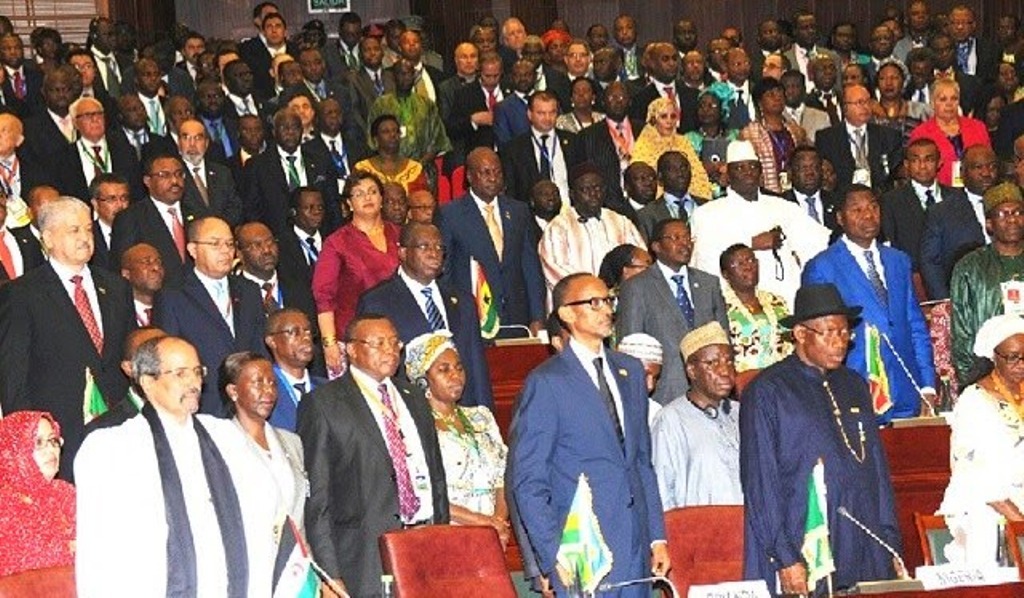 Addis Ababa (HAN) June 27, 2014. Regional Africa security and partnership update:  by. Ofer Petersburg, the opening ceremony for the 23rd African Union Summit in Malabo was to begin Thursday with a declaration of support for the three kidnapped Israeli teens by a number of participants, until bad blood brought tensions to a boil.

“I have never seen such racism, such anti-Semitism. We were humiliated,” said several of the Jews in attendance, who had left Equatorial Guinea in a fury after changing their flights.

“It all began when one of the Arab delegates, from Egypt, approached us at dinner the night before the opening and asked what we were doing here, pointing at the men wearing kippahs,” said Israeli businesswoman Yardena Ovadia, who had organized the invitation of the Jewish delegation to the summit.

Ovadia, who has close ties with Equatorial Guinea President Teodoro Obiang, said that she explained to the delegate that her and her friends were Jews from the US, not Israelis.

The following day representatives of the Arab League refused to enter the hall until all the Jews left, or as they called them, the “Israeli delegation.”

“We were already seated in the conference hall,” said Ovadia. “The heads of the Arab League announced a boycott of the conference until the ‘Israeli delegation’ left. We officially declared that we were Americans, not Israelis, but it didn’t help.”

“There was a representative of the US congress with us. She was shocked and said that there will be an official government statement,” Ovadia added.

Fourteen delegates from the delegation of the Conference of Presidents of Major American Jewish Organizations stood up and left the hall, and the proceedings opened after an hour’s delay.

Palestinian President Mahmoud Abbas was scheduled to appear but sent his deputy in his stead. UN Secretary General Ban Ki-moon was in the hall, as well as Egyptian President al-Sisi, the prime minister of Spain, four Iranian ministers, and other foreign dignitaries.

The clash with the “Israeli delegation” was started by the president of Mauritania.

The Palestinian Authority representative said in his address to the summit that the Jews have experienced a holocaust but that they were currently instigating a holocaust on the Palestinian people. A statement released by the heads of the Jewish delegation said that no ear could absorb such menacing words.

“In our hotel are four senior Iranian ministers,” said Ovadia. “They were very cordial until the day of the summit’s opening. They slammed us unjustifiably. This will not go unanswered.”

She added: “The president of Equatorial Guinea called us to personally apologize and invited the Conference of Presidents’ delegation to a special dinner, but we had rescheduled their private flight and they had already left.”