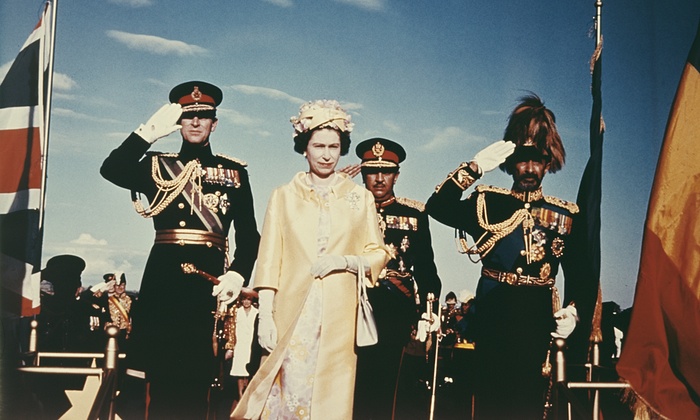 ADDIS ABABA (HAN) February 3, 2016 – Public Diplomacy and Regional Stability Initiatives News. The Queen and the Duke of Edinburgh came here tonight to a leonine welcome at the start of a week’s state visit to Ethiopia.

Waiting for her at the airport was the Emperor of Ethiopia in field-marshal’s uniform and a lion’s mane helmet. As she drove the two miles to the Jubilee Palace she passed two huge gilded aluminium lions erected in her honour.

Halfway on the journey they changed from a car to a state coach drawn by six white horses. Surrounded by a 100 horsemen of the imperial bodyguard, jogging under heavy lion’s mane helmets, it took more than an hour to drive the two miles through crowd clapping a rhythmic welcome and drums thumping. Horsemen cantered among the crowd with even longer lions’ manes stuck to their hair.

Later the Queen was guest of honour at a state banquet in the old palace, where in the gardens the Emperor keeps his pet lions. By then she could be in no doubt that she had come to the land of the Lion of Judah, King of Kings.

The welcome, all the same, was gay and unforced. The traffic jams began two hours before her plane arrived, and it was noticeable how pedestrians who had armed themselves with spears made the best progress.

Her palace looks out upon the handsome African Hall where many times in the past 18 months African leaders have met to denounce the colonial Powers and to plan the liberation of Southern Africa. But a banner strung across the road proclaims “Long live the friendship between Great Britain and Ethiopia.” And behind her palace are roads named after three British generals – Wavell, Wingate, and Cunningham – who helped to liberate Ethiopia from the Italians.

Tonight, Britain was in Ethiopian eyes the great country and a liberator rather than a colonialist. Many of the soldiers at the airport wore the British Africa Star.

The state visit is being made in return for one paid to London by the Emperor when Sir Winston Churchill was Prime Minister ten years ago. Britain was also host to the Emperor and his family while he fretted out four years of exile in a country house near Bath.

For a week, Ethiopia is prepared to be unashamedly imperial. Today’s Issue of the “Ethiopian Gazette” carefully notes that the six white horses drawing the state coach were bred from the stable of the Emperor Maximilian, famous 300 years ago.

During the week the accent will be mainly on the country’s ancient glories, with a night spent camping above the old capital of Gondar. But the Queen is also to see new glories, such as the huge Tendaho cotton estates, one of the few pieces of British enterprise in Ethiopia. It is the successful vision of Mitchell Cotts, and that company’s 10,000 British shareholders.

The Queen’s arrival has inspired the capital’s only daily newspaper to inaugurate a women’s page, and in this the Queen is praised as a monarch who has shown interest in industry and patronised the arts. There is little doubt that the Queen, who added to today’s brightness by wearing a buttercup yellow coat and petal hat, will wipe out the somewhat frosty memory most Ethiopians have of the British monarchy.

No one in public speeches is likely to mention the unhappy events of a century ago, when the Emperor Theodore felt himself slighted in correspondence with Queen Victoria, and the incident ended with a British punitive expedition and the Emperor dying after battle. Today’s horsemen looked as if they had galloped out of the last century, but their welcome belonged to this happier age.

The Queen has invested Emperor Haile Selassie with the honorary rank of field-marshal in the British Army. The only other monarch in the world to hold this British rank is the King of Nepal.