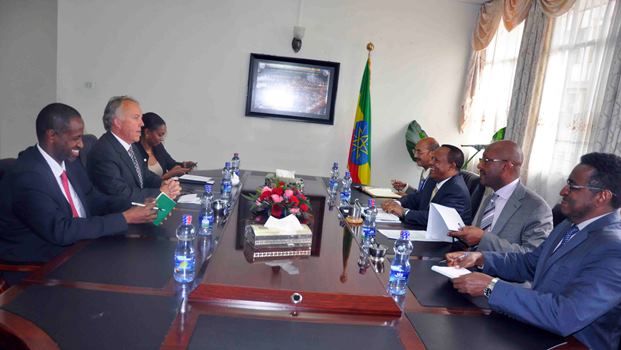 State Minister of Foreign Affairs, Ambassador Taye Atske-selassie met with United Nation Special Representative of the Secretary General (SRSG) for Somalia, Mr Michael Keating on Monday (August 30, 2016). The two sides discussed on a range of issues of regarding Somalia including Election 2016.

They reiterated the need for the implementation of governance and state formation as envisioned in the Somalia Vision 2016 and agreed that the process was in progress. They also expressed the optimisim that following the endorsement of the electoral calendar by the National Leadership Forum, Somalia will stick to the election time frame which will culminate in the election of a President on October 30.

On the occasion, Mr. Keating commended Ethiopia for its unreserved efforts of promoting peace and stability in Somalia and the sub-region.  State Minister Ambassador Taye Atske-selassie on his part reaffirmed his country’s readiness and commitment to work together with the United Nations and other partners to ensure a peaceful and prosperous Somalia.