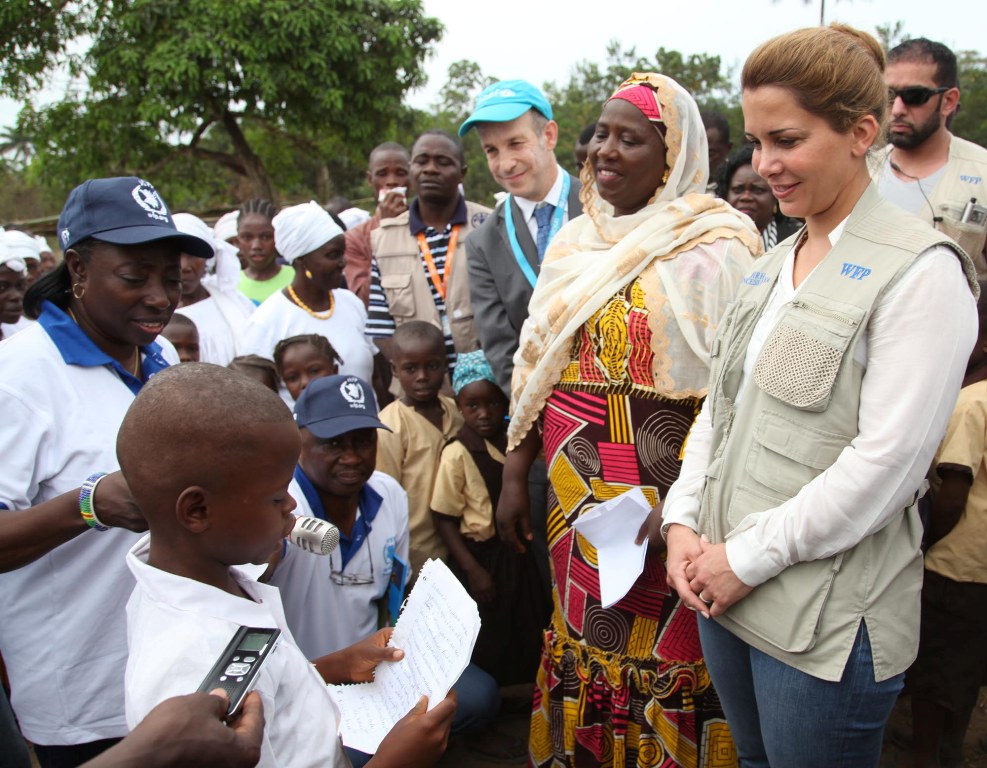 Addis Ababa (HAN) July 16, 2014 – UNHCR Press Release, Kisut Gebre Egziabher in Gambella. UN envoy Princess Haya Bint Al Hussein, wife of the ruler of Dubai, said she was “unprepared” for the suffering she found when visiting refugees in western Ethiopia, which now hosts 170,000 South Sudanese who have fled fighting in their homeland since December.

“The fact that the refugee emergency is still unfolding has hit me hard,” said Princess Haya, who spent most of her time on Tuesday in the muddy Kule 2 camp with refugee children and talking to their mothers.

The conflict and worsening humanitarian situation inside South Sudan is fuelling a refugee exodus into Ethiopia, largely women and children. Nearly 1,000 more refugees arrive each day to join the 170,000 who had already fled the violence that erupted last December. Gambella was already hosting 59,000 South Sudanese who were in camps and host communities prior to this conflict.

“One of the most compelling aspects of this crisis is that the majority of the refugees in Ethiopia are women and children,” said Oscar Mundia, UNHCR’s Senior Emergency Coordinator in Gambella. “Almost all are reliant on aid agencies for food and other services which means that a shortfall in funding will have catastrophic consequences.”

The original estimate of 150,000 refugees in Ethiopia by the end of the year has already been surpassed and UNHCR and its partners have now increased the planning figure to 300,000. Last Friday UNHCR and partners launched an appeal for $658 million to help as many as 715,000 refugees expected in Ethiopia, Kenya, Sudan and Uganda by the end 2014.

UNHCR warns that a failure to respond to the appeal will significantly hamper aid delivery and force a prioritization of services that could include cuts to food rations and a scaling back of critical programs for malnutrition. Most refugees walked for weeks to get to safety in Ethiopia, surviving on wild fruits, leaves and some edible roots.

“At a time when the world is witnessing an unprecedented number of large and simultaneous emergencies, global advocacy for the South Sudan regional refugee crisis is desperately needed,” said Ann Encontre, UNHCR’s Regional Refugee Coordinator.

“I am confident that this visit by UN Messenger of Peace HRH Princess Haya will raise the profile of this horrific crisis and hopefully serve to encourage heightened support from the international community.”

UNHCR and Ethiopia’s Administration for Refugees and Returnees Affairs (ARRA) as well as other partners are working to prevent an outbreak of communicable diseases in the camps as the rainy season grips the area. As all three camps have almost reached their capacity, UNHCR and ARRA are working with regional authorities to secure land to quickly develop a fourth camp.

Princess Haya this month donated US$ 500,000 to support UNHCR’s efforts in emergency nutrition and food security for South Sudanese refugees in Ethiopia. It is estimated 120,000 individuals will benefit.

The preliminary results of a recent nutrition survey showed the average Global Acute Malnutrition rate for the three camps was 28 percent, down from as high as 37.7 percent in the initial phase of the emergency.

Over her one-day visit, Princess Haya saw aid sites and met local officials and beneficiaries. UNHCR Gambella staff briefed her on the overall humanitarian situation. She praised the work of UNHCR, the Administration for Refugee and Returnee Affairs (ARRA) and other aid agencies and reaffirmed her commitment to advocating for greater burden sharing and solidarity.

UNHCR’s Acting Representative in Ethiopia, Mr. Bornwell Kantande joined Princess Haya in applauding the people and government of Ethiopia for their generous hospitality and open-door policy. “We don’t take this hospitality and magnanimity for granted,” he said, and added: “It is in the interest of UNHCR to support the hosting communities who give a lot to the refugees even though they are not better of themselves.”

At present, Ethiopia is hosting some 580,000 refugees, making it one of the world’s top 10 refugee hosting countries, according to UNHCR.