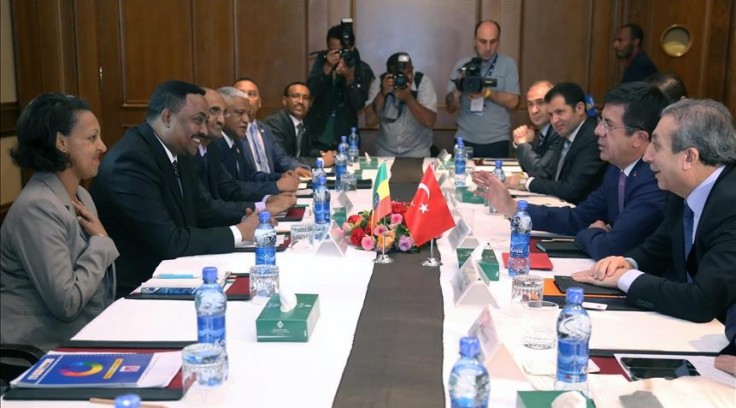 “Both sides agreed to mutual cooperation in the fields of energy, mining and hydrocarbon,” the agreement said.

Turkey will cooperate with relevant Ethiopian institutions to upgrade their skill sets in geothermal and coal field surveys.

The Ethiopian Broadcast Corporation also signed a cooperation agreement with the Turkish Radio and Television Corporation.

The two countries also agreed to “enhance their efforts to promote their products in each other’s markets, establish a sustained mechanism for the exchange of trade and investment information, and narrow trade imbalances.”

Mehmet Buyukeksi, head of Turkey’s exporters’ council, told Anadolu Agency: “Given the growth of businesses between the countries, we want to have an office which could facilitate banking services.

“We also requested the Ethiopian side to expedite the procedures for working visa extensions for Turkish businessmen, investors and employees in Ethiopia.”

Buyukeksi said the Ethiopian side had agreed to establish an office as per the law and promised to expedite visa issues.

“One of our demands which will enable both countries to improve their bilateral trade and business relations was the establishment of a free trade area between the countries,” he said, adding: “But the Ethiopian side said it was not ready at this moment to enter into this agreement.’’

In his key note address to the Turkey-Ethiopia Business Forum, Zeybekci said the existing all rounded ties between the two countries had what it takes to win the future for both.

“The business model we pursue is a win-win, but when it comes to Ethiopia, we want Ethiopia to win first,” he said.

“If a country which has a similar culture with Turkey and proud Islamic history wins, we also win,” he said.

He added the agreements signed between the two sides on Wednesday will further strengthen bilateral ties.

Tewelde Mulugeta, a ministry spokesperson who attended the meeting, told Anadolu Agency: “Both countries agreed to coordinate their struggle against terrorism.”