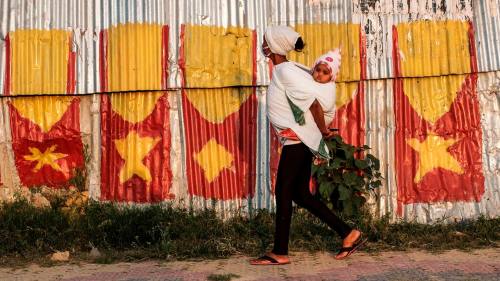 Banners flying high, speakers blaring campaign slogans and cafes abuzz with conversations about politics, Meqelle is in election fever as the Tigray Regional State prepares to hold a vote for its State Council. Defying the House of Federation, which met yesterday to officially declare the election “illegitimate” and “unconstitutional,” it will be entering uncharted territory in going forward with the votes next week.

Notably, the House did not pass a resolution on actions that could be taken by the federal government against the region’s election despite the insistence of members from the Amhara Regional State. Legislators from the region were not in attendance during the meeting, while the incumbent in the northern state, Tigray People’s Liberation Front (TPLF), has been resolute on holding the election since the House’s vote to postpone it.

The only opposition party in government in all of Ethiopia at the moment, its officials have insisted they are merely exercising their right to self-government. While what has grabbed attention nationally may have been the dire relationship between Meqelle and Addis Abeba, the opposition parties, almost all of each are vying for 152 of the seats occupied by the TPLF in the Regional Council, say that the significance of the election is democratisation. Development policy, health and education have also found space in the over four hours of airtime allotted to political debates.

“TPLF has been in power for so long, but it hasn’t solved many of the issues in the State,” said one resident of Meqelle. “I think it’s time for a change.”

While the revision of the electoral system to a hybrid system and the opposition’s ability to field candidates to seats in the Regional Council has been lauded, there have been criticisms. Urbanisation, food security and environmental issues have not received enough attention, according to observers in Meqelle. Still, the contending parties feel optimistic about the impact of the election, for which 2.7 million voters have been registered and over 2,600 polling stations have been prepared, according to the Regional State Election Commission.

“The coming five years won’t be like the past five,” said Abrha Teklu, vice-chairperson of National Congress of Great Tigray (Baytona).