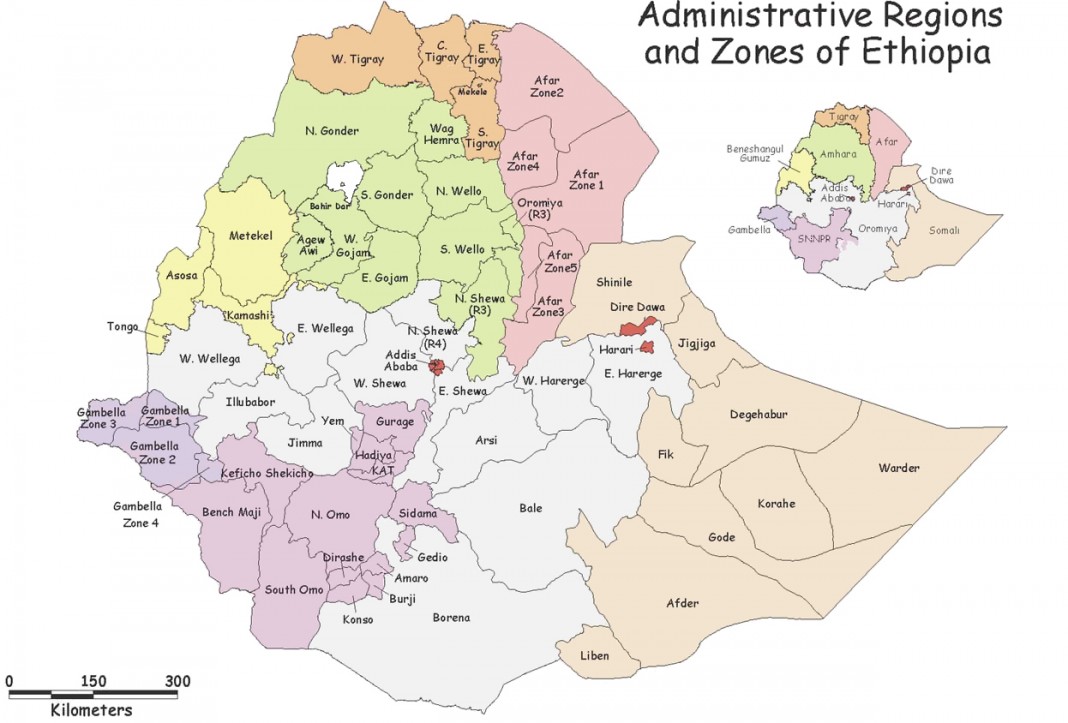 ADDIS ABABA (HAN) February 18, 2016 – Public Diplomacy and Regional Stability Initiatives News.By: Worku Aberra (PhD). Supporters of killil have attempted to convince the Ethiopian people that ethnic federalism is not only the right system of government for multi-ethnic Ethiopia but that it is also common throughout the world. Ethiopia is not alone, they declare; other countries, specifically India, Switzerland, and Canada, have well functioning ethnic federalisms, they contend. Nothing is farther from the truth.

The claim confuses ethnic federalism with democratic federalism, a failure to distinguish between appearance and substance, façade and content, the nominal and the real. The confusion probably arises from the fact that these countries have a multi-ethnic population and a federal system of government. Some commentators on federalism have also contributed to the confusion when they sometimes use the term “ethnic federalism” casually in describing the political systems in these countries.

The Uniqueness of Ethiopia’s Ethnic Federalism

The difference between ethnic federalism and the federal system of government that exists in these countries is immense. First, they have a democratic form of government, the essential condition for a functioning federalism. Without democracy, there can be no real division of powers between the central and local governments. Nor will there be any protection of individual and minority rights. Just as a fish cannot survive without water, federalism cannot exist without democracy. Federalism under authoritarian rule, for example as it existed in the former Soviet Union and former Yugoslavia, under the tight control of the communist party, is not genuine federalism. It is federalism in appearance and authoritarianism in substance, as many scholars have argued.

Second, when establishing their administrative units, none of the three countries used ethnicity to delineate or to name the divisions. India has more than 2000 ethnic groups, but only 29 states and seven territories. Switzerland has three main ethnic groups, German, French, and Italian, but 26 administrative units called cantons. Canada, home to three major groups, the English, the French, and the indigenous people, has 10 provinces and three territories. There are no Bantustan-like ethnic homelands, delineated along ethnic lines, named after ethnic groups, restricted to specific ethnic groups, in any of these countries. (The exception could be the reserves in Canada).
The Absurdity of Ethiopia’s Constitution

Constitutionally, among the community of nations, with or without democratic governance, with or without federalism, Ethiopia stands alone. It is the only country on earth that has bestowed sovereignty on ethnic groups, rather than on the people as a whole. Article 8 of the constitution states that, “All sovereign power resides in the nations, nationalities, and peoples of Ethiopia”.

I am not a constitutional expert, but to my understanding, the article states that supreme authority in Ethiopia resides with ethnic groups, not with the Ethiopian population as a polity. Article 8 suggests that any ethnic group in a killil, however small it maybe, can exercise its sovereign right and thus affect the economic, political, social, and legal trajectory of a zone, a killil, and even the rest of the country.

And then there is article 39. Article 39 (1) states, “Every nation, nationality and people in Ethiopia has an unconditional right to self-determination, including the right to secession”. The constitution details the steps, procedures, and conditions for the separation of the killils from Ethiopia. Here again, Ethiopia is the only country today that has enshrined an article in its constitution to bring about its own destruction. The countries that had included the right to secession in their constitutions in the past, the former Soviet Union and former Yugoslavia, had their wish fulfilled: they both disintegrated.

The constitution not only prescribes a suicide pill for disintegration, but inspires the elites of any ethnic group within an existing killil to strive for killilhood. Using the sovereign right to self-determination granted to ethnic groups in the constitution, the elites of an ethnic group without a killil can demand killilhood or special status in a killil zone so that they can access scarce resources and improve their political standing, as has happened with the Silti in SNNP and Kemant in Amhara regions, resulting in ethnic hostility and reginal instability.

Ethnic Federalism Canada is not

When killil supporters cite Canada as a country with ethnic federalism, they are trying to soften, camouflage, conceal the danger it poses to national unity by associating it with a multi-ethnic, tolerant, stable, prosperous, and democratic country. The message: Ethiopia is in good company, no worries, but the reality is that the political system in Ethiopia differs sharply from Canada’s.

To underscore the contrast, I have summarized the major features of ethnic and Canadian federalism in the table below. The differences could not be any starker.

A Summary of the Major Differences between Ethnic and Canadian Federalism. 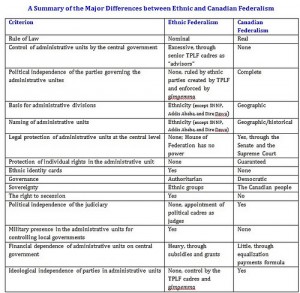 Confusion between Ethnicity and Linguistic Groups

I will not discuss the contents of the table in detail, but will highlight the glaring dissimilarities between ethnic and Canadian federalism. Killil supporters claim that Canada has ethnic federalism, mostly probably because the majority of French-speaking Canadians reside in Quebec and the majority of English-speaking Canadians live in the other provinces. Their assertion confuses, intentionally or unintentionally, ethnicity with linguistic groups.

Yes, the majority of the people living in Quebec are French speaking, but they come from diverse ethnic backgrounds, European (French and Belgian), North African, Haitian, Vietnamese, Cambodian, African, indigenous people, and others. And the majority of the people living in the other provinces are English speaking, again from diverse ethnic backgrounds, the English, Scottish, Welsh, Irish, German, Ukrainian, Indians, Jewish, Caribbean, indigenous people, other Europeans, and immigrants from all over the world. Hence, in Canada, broadly speaking, there are two major linguistic groups—English and French—but many ethnicities, and no ethnic group called Ontarians, Quebecers, Manitobans, British Columbians.

Second, although the Ethiopian constitution bestows sovereign powers on ethnic groups, strangely it provides no protection of individual rights in the killils, but the Canadian Charter of Rights and the Canadian constitution protect both individual and minority rights across Canada, in all the provinces and territories. As a result, the English speaking community of Quebec, composed of different ethnic groups as stated earlier, although it only accounts for about 10% of Quebec’s population, enjoys the right to run its own institutions, schools, colleges, universities, hospitals, and municipalities in English.

Similarly, French-speaking Canadians, living in the rest of Canada, enjoy identical constitutionally guaranteed rights whenever their numbers warrant. Moreover, a French- speaking Canadian living in any of the English-speaking provinces has the right to be tried in French, and an English-speaking person residing in Quebec, in English. In civil cases, individuals have the right to speak either in French or in English before the courts anywhere in Canada. Do such rights exist under Ethiopia’s ethnic federalism?

Are the Amharic-speaking people living in Oromia entitled to their own schools, clinics, and municipalities in Ambo, Adama, Bishoftu, and other cities? Do they have the right to be tried in Amharic or can they speak in Amharic before the courts in civil cases? Do the Oromo people living in the Amhara or Somali region have such rights?

Third, in Canada residence, instead of ethnicity, defines an individual’s legal identity on all official documents and ID cards. A Quebecer is a Canadian citizen of any ethnicity who lives in Quebec. Although an immigrant, I am a Quebecker enjoying the same rights as a native-born Quebecois of French origin, including the right to run for a political office, even the right to become the prime minister of Canada. (Whether I will be or not is a different matter!)