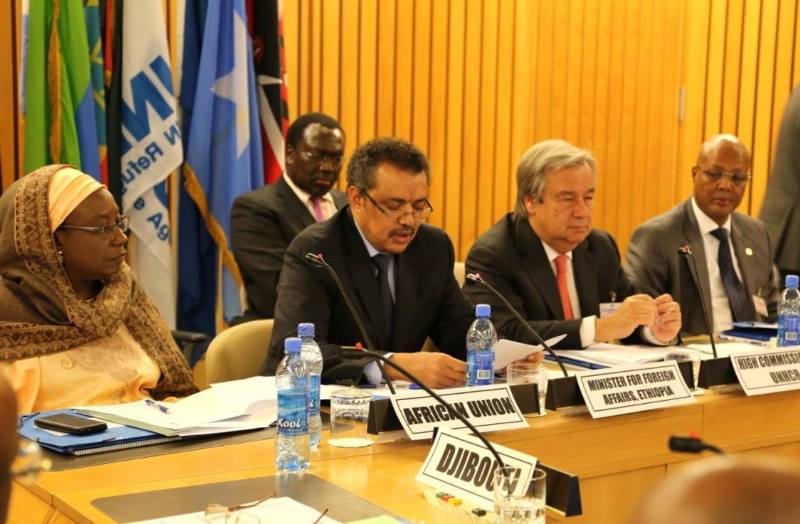 Addis Ababa (HAN) August 21, 2014. Humaniterian and Diplomatic news. The regional Ministerial Meeting of the UNHCR’s Global Initiative on Somali Refugees convened on Wednesday (August 20) in Addis Ababa. It is aimed to mobilize resources, identify strategies and promote innovative, comprehensive and durable solutions for Somali refugees and for displaced populations in the region.

Dr Tedros Adhanom, Ethiopia’s Minister of Foreign Affairs said the UNHCR’s convening of the High Level Panel on Somali Refugees in 2013 demonstrated its dedication to the support of Somali refugees and to those hosting them and to its efforts to explore comprehensive, durable and innovative solutions. He noted Ethiopia’s tradition of assisting refugees as well as its open-door policy, pointing out that it remained firmly committed to the principles of the 1959 UN Convention and its Protocol of 1967 as well as the 1969 OAU Convention Governing the Specific Aspects of Refugee Problems in Africa. Under its enactment of Ethiopia’s Refugee Proclamation in July 2004, it was also committed to the provision of unhindered humanitarian support, and to finding sustainable, innovative and durable solutions as well as protection for refugees.

Dr Tedros Adhanom, Ethiopia’s Minister of Foreign Affairs,  underlined the importance of voluntary repatriation for Somali refugees and the necessity of creating enabling conditions for them to participate in the creation of a peaceful and prosperous future. Antonio Guteres, UN High Commissioner for Refugees, also stressed the importance of voluntary repatriation and said the meeting was an essential element of finding common ground and overcoming the challenges facing the refugees and displaced populations.

Dr Tedros Adhanom, Ethiopia’s Minister of Foreign Affairs also called on the international community to fully support Somali refugees and help Somalia overcome security challenges. He stressed the importance of Somali Government taking the refugee issue as a priority and creating conducive conditions for the welfare of those returning. Participants also delivered country statements and the meeting included extensive deliberation and discussion on the Addis Ababa Commitment towards Somali Refugees.