Home Ethiopia Ethiopia: The Green Gold Drug of Ethiopia, Khat is under threat 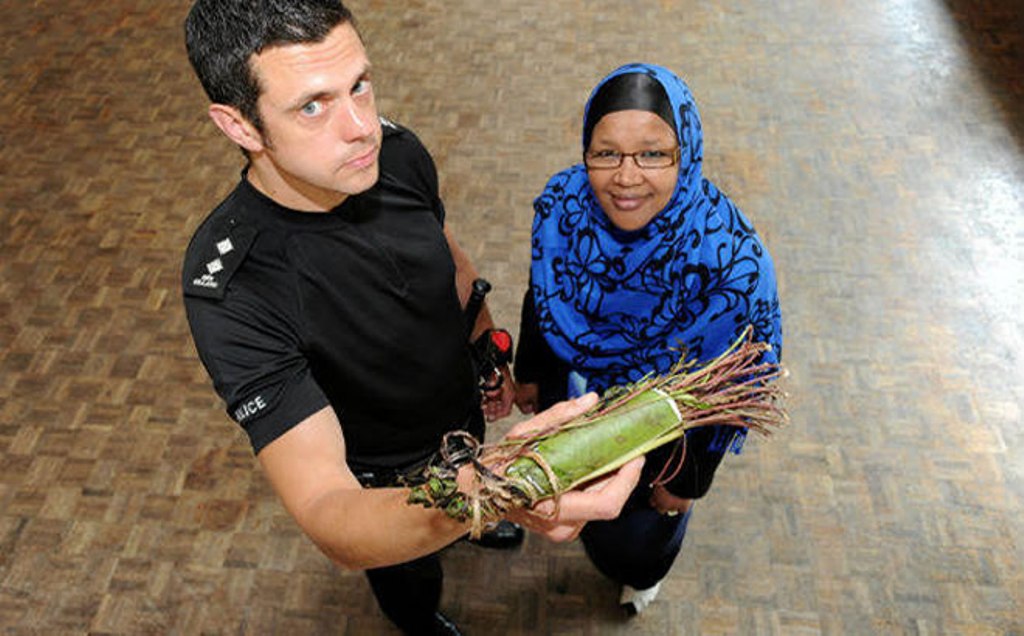 Addis Ababa (HAN) July 16, 2014 – Ethiopia’s major revenue item news update:  The European ban  Challenges the Ethiopian green leafs call Khat export, While Ethiopian Government agencies and traders are lobbying to Export Rome and Romania to smuggle through European markets. the British ban – coming at a time of strained relations between the UK and Kenya – has only strengthened the crop’s position in Kenya itself.  For decades Meru have lobbied for government support in the industry, but mostly governments since Independence have taken a hands-off approach to a crop subject to international suspicion.  With the British ban, the government finally threw its support behind it, funding legal action in the UK against the decision, and attending protest rallies in Meru.  Kenyan lawmakers told the British government that a khat Drug ban in Britain could lead to people once employed in the trade joining al-Shabab, an armed rebel group in Somalia. Though these Kenyan efforts have not swayed opinion in the UK Home Office, they do reflect quite a change in the Kenyan government’s policy towards the substance. The British government banned the Khat drug, which is already prohibited in the United States and much of Europe countries.

By Abdi Tsegaye, FORTUNE  Staff Wrote this Opinion:  Just like most of his countrymen in the East and West Haraghe Zones of the Oromia region, there is a lot at stake for Abdella Yusuf, 41, with the one item he knows most, Khat, coming under threat.

In Ethiopia  is a land of scarce water resources, and they are even more threatened by the cultivation of khat (mildly hallucinogenic psychostimulant leaves that are very popular in Horn of Africa). Khat is quite expensive, especially for local standards, and income of many addicted is spent mainly on consumption of the plant, leaving them undernourished. Eating of khat and not eating proper balanced diet, plus dehydration it causes damages both brain – eading to psychiatric.

The legend behind the discovery of this addictive leaf is very much the same as that of coffee: A Yemeni herdsman, on seeing his goats becoming overactive after chewing the leaves, tried it for himself, before sharing his wisdom with the world.

As the elder son of a Khat farmer in East Hararghe Zone, Abdella has been on the farm helping his father since early childhood.

Khat has served many purposes in his locality. On top of being a means of making a living for almost all of his neighbourhood and extended family members, it is used to welcome and entertain guests, in mourning, at weddings and during collective labour.

He withdrew from school in grade eight, becoming one of the numerous small scale Khat traders supplying different varieties of the crop with different vernacular names in Dire Dawa. He expanded his business upon reaching the market in Addis Abeba during his early 20s.

Successful enough to find foreign markets for the green leaf he regards as “the one I know most”, he began exporting Khat to China a decade and a half ago. Business was going well; so too was life. He has married and became a father to a daughter. There were no problems of supply from the East and West Hararghe Zones. No problem of market too. He was sending between 800kg to 1000kg of dry and fresh Khat he acquired from farmers in Aweday – the place most famous for quality Khat – and Baddessa, another famous region for the crop. Almost a decade in the business and with an increasing number of daughters, now four, the first blow came when China banned Khat from crossing its border.

“When China banned Khat, I was quite confused at first,” he recalls. “My best experience and knowledge is all about Khat, I don’t know what to do if not Khat.”

Thus, a shift in the destination to the two types of Khat he has been exporting. He succeeded in gaining access to Khat chewers in The Netherlands. But, not such a large amount as was being sent to China is possible there. The scale of his exports, as well as his earnings, have decreased by half. But now, the same blow comes from the government of The Netherlands.

A third market destination had to be found, in order to reach members of the Somali, Yemeni and Ethiopian communities, accustomed to chewing the green stimulating leaf, beginning from the time spent back in their home countries.

However, this Ramadan has not come with good news for Abdella, though he was aware of it ahead of time. Right at the beginning of the fasting season, on Saturday, June 22, 2014, Ethiopian Airlines informed him that it will no longer carry Khat to the UK. And in the UK, two days were left for the deadline that activated a legislation by the House of Commons to add the crop to the banned category C drugs in the country. Amidst this, Abdella’s 1,700 Kg of Khat ready to be transported to the UK on Saturday and Sunday has been left in the store.

“I thought I would be sending on those days and so brought 700kg to Addis Abeba and collected 1,000kg in my stores in Aweday and Baddessa,” he said.

With the latest classification of Khat as a category C drug, penalties for possession could lead to two years in prison. For the supply and production, up to 14 years of imprisonment could result.

“Police can issue a warning or an on-the-spot fine of £60 for the first two times that person is found with Khat,” says the UK government’s document on drug penalties. “If you’re found with khat more than twice, you could get a maximum penalty of up to two years in prison, an unlimited fine or both.”

It seems that the decision has been made in the west that Khat is a harmful drug, with the UK joining the league of nations that have banned its import, use and distribution. In the producing countries, such as Ethiopia and Kenya, however, the repercussions are unsettling in many respects.

Abdella is one of the 300 exporters of Khat to different destination across the globe, with Somalia and Djibouti taking the lead.

The rise, both in terms of volume and earnings, has also continued in 2012/13, reaching 271 million dollars in earnings from the export of 47,000tn of Khat. This was followed by 249 million dollars being earned from 44,000tn over just the past ten months.

Nonetheless, the country is exporting only a small portion of the total amount of Khat it has been producing. In 2012/13, only 47,000tn made its way to the foreign market, out of the 190,000tn produced by close to 2.5 million farmers cultivating the crop on a total area of 201,115ha.

It is mainly produced in the Oromia region, which accounted for 64pc of the total production in 2012/13, with close to 1.5 million farmers engaged in its cultivation.  Next is the Southern region, which contributed 24pc of the total production through its 714,276 million smallholder farmers. A considerable amount of farmers also produce 3.2pc of its production in the Amhara region, with other regions, including Somali, Harari, Dire Dawa and Benishangul Gumuz, contributing the remaining amount.

If there is one thing puzzling about the cultivation and trade of this plant in Ethiopia, even as a premier export item, it is its power to prove itself both on the domestic and foreign markets, completely independently and with no policy provisions from the government.

The only one section within the Ministry of Trade (MoT) working on issues related to Khat is the Khat Marketing Team under the Food Crops Marketing Directorate. The main task of this team is to oversee the export aspect of the Khat market, according to Tesfaye Amare, the team’s coordinator.

“There is neither research nor a package for extension support for the product,” he told Fortune. “It seems that the government is not concerned, even if the whole world bans it.”

Officials at the Agricultural Extension, Crop Department within the Ministry of Agriculture (MoA) and the Agricultural Research Institute have also confirmed that the cultivation and distribution of the plant is being operated solely by the farmers, without any support from them.

“We do not have any package or program regarding Khat, thus we have no policy ground to take action in any way,” says the crop department section head at the MoA. “However, as one of the major sources of foreign currency, it needs to be packaged and supported by the government.”

Only demand has kept it as one of the top commercial agricultural commodities, though, according to Tesfaye.

With the latest ban coming from the UK, Abdella, unlike the government, is not remaining indifferent. He is looking for other market opportunities.

Photo: Insp Ben Gillard and Jawaahir Dahir with some khat: Somalis. hararians, Oromo and Afars in UK say drugs ban on khat should be celebrated.