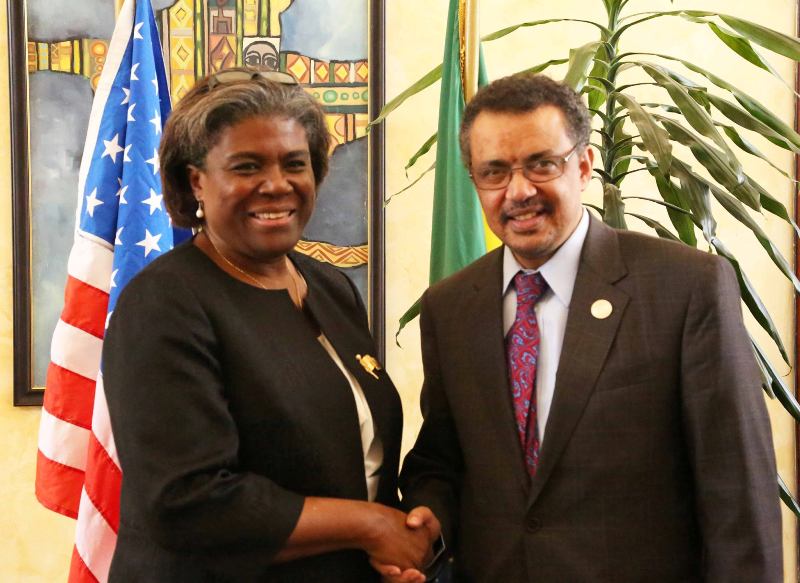 Addis Ababa (HAN) January 31, 2015 – Public diplomacy  and National Security issues. Ethiopian Foreign Minister Tedros meets Linda Thomas-Greenfield, US Assistant Secretary for African Affairs. Ethiopian Foreign Minister, Dr. Tedros met with Linda Thomas-Greenfield and discussed bilateral and regional issues as well as exchanging views on the challenge that radicalization is posing to the continent and at a global level and on ways to tackle it in the context of the MyDugri meeting to remove the threat of Boko Haram.

Ethiopian Foreign Minister Dr. Tedros stressed that effective counter-terrorist activity required the education of youngsters who are vulnerable to terrorists. He also emphasized the need for effective control of terrorist finances and the importance of developing intelligence-sharing mechanisms to deal with such groups as Boko Haram and Al-Shabaab.

Ms. Thomas-Greenfield noted that the designation of Boko Haram and Al-Shabaab as terrorist groups was helping in stopping terrorist financial activity and underlined the need for concerted actions. The two sides noted the meeting between President Obama and Prime Minister Hailemariam was important in revisiting and expanding cooperation between Ethiopia and the US. They agreed that the two sides needed to take practical steps to translate the high level of commitment shown by their leaders into effective action. On South Sudan, they reaffirmed the need to extend full support to the IGAD-led mediation process and noted the importance of preventing any backtracking of the process to end the conflict.

They welcomed the release of the names of the new cabinet in Somalia and agreed on the importance of encouraging stabilization measures in the areas freed from Al-Shabaab.

Ethiopian Foreign Minister Dr. Tedros highlighted the reconstruction efforts taking place in Somalia and the emerging businesses in Mogadishu. He noted the importance of encouraging encourage trade and investment to change the narrative of a failing Somalia, and said Ethiopia was currently working with Government of Somalia to host a Somalia business forum in Addis Ababa. Ms. Thomas-Greenfield welcomed the effort. The two sides also exchanged views about Ethiopia’s upcoming national election in May.

Photo: With Linda Thomas-Greenfield, US Assistant Secretary for African Affairs