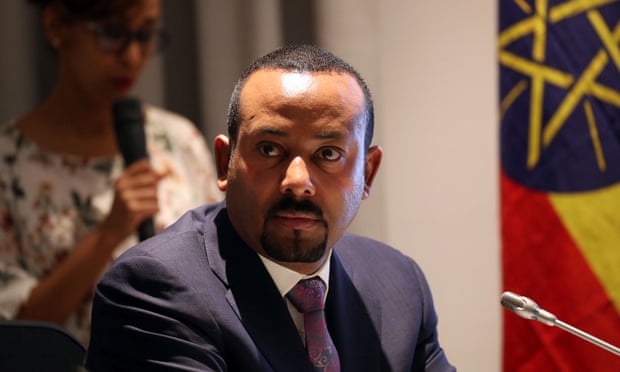 ADDIS ABABA (HAN) September 23. 2020. Public Diplomacy and Regional Stability Initiatives News. Monitoring Regional Issues. A fresh outbreak of violence is the latest in a set of setbacks for Ethiopia’s Prime Minister Abiy Ahmed, who won the peace prize in 2019. Outraged by the slaying of a popular Ethiopian musician, about 100 youths descended on the British Lodge in the Rift Valley town of Batu, torched its 16 rooms and forced its guests to flee.

Almost three months later, the tourist getaway some 160 kilometers (100 miles) south of the capital, Addis Ababa, remains shut. All but five of its 33 staff have been let go, and the smell of charred furniture permeates what remains of its buildings.

“It was such a stupid act,” said Tibiyo Ilmeyu Bedaso, 31, the lodge’s manager. “The government has done nothing to help us. People here don’t know how to plan for the future.”

The Batu attack was part of a wave of protests following the June 29 assassination of singer Hachalu Hundesa that saw an eruption of long-simmering ethnic tensions in the east African nation. With a fresh outbreak of violence in western Ethiopia over the past three weeks, the upheaval is compounding a succession of setbacks for Prime Minister Abiy Ahmed less than a year after he won the Nobel Peace Prize.

The pandemic threatens to reverse years of stellar economic growth, while Abiy’s decision to postpone elections due in August until a yet-to-be determined date, ostensibly to curb the virus spread, raised questions over his commitment to democracy.

Regional leaders are also growing increasingly strident in demanding greater autonomy, desert locust swarms are undermining regional food security, and Egypt and Sudan have taken umbrage at Ethiopia’s plans to fill a massive reservoir on the Blue Nile that threatens their water supply.

Abiy won the Nobel for ending a protracted conflict with neighboring Eritrea, but even the peace pact is in doubt as Eritrea says it hasn’t delivered the expected economic benefits and Ethiopian troops continue to maintain a presence in its territory.

Tensions along ethnic lines are arguably the premier’s deepest-seated challenge, one that threatens to undermine the stability on which Ethiopia’s recent economic success is built.

Musician Hachalu was a native Oromo, the country’s biggest ethnic group, whose songs became popular during anti-government protests from 2015 to 2018. While the motive for his killing remains unclear, the violence that ensued claimed 200 lives and saw towns turned into battle zones in the Oromia region before the security forces arrived.

Those demonstrations have abated, but inter-communal fighting has flared in the western Benishangul-Gumuz region, leaving at least 140 dead since the start of this month. The army says more than 25,000 people have fled their homes.

Abiy “lacks the experience and know-how to lead a nation of 110 million people alone,” said Merera.

Addis Ababa shows what is at stake in maintaining stability. Scores of new hotels, conference centers, factories and high-rise apartments have sprung up in recent years, and a light rail network connects the city center with industrializing areas in the south. Nearing completion is a skyscraper that will serve as the Commercial Bank of Ethiopia’s headquarters and a development in the north of the city housing restaurants, a boutique hotel and viewing platform.

But investors whose businesses have flourished under Abiy are becoming skittish.

“One of the big components for a successful businesses is peace and security,” Bethlehem Tilahun Alemu, the managing director of soleRebels, which makes shoes out of recycled materials, said by phone. “We’re going through a change, and we are going to have to be patient to see the results. It is a very hard time for everybody.”

Samrawit Fikru, the chief executive officer of taxi hailing app RIDE credits the Abiy administration for helping bring down data costs and improving the regulatory environment. Still, the government’s decision to shut down the Internet for 22 days during the July unrest weighed heavily on her company’s revenue and put its more than 22,000 drivers in the capital out of work.

“Of course we need our country to be peaceful,” she said. “But at the same time, shutting down the Internet is creating problems, especially for the technology sector.”

Despite the upheaval, the International Monetary Fund forecasts economic growth of 3.2% this year. While down from an annual average of almost 9% over the past decade, Ethiopia is one of few nations still expanding.

Africa’s oldest nation state, Ethiopia follows its own calender, has its own script and claims to be the indigenous home of coffee. With more than 80 ethnic groups, the country has always been a melting pot.

In 2018, Prime Minister Hailemariam Desalegn stepped down after failing to halt protests by members of the majority Oromo and Amhara communities directed at the minority Tigrayans, who dominated the ruling Ethiopian People’s Revolutionary Democratic Front since it ended the country’s dictatorship in 1991. Abiy, an ethnic Oromo who had risen from small-town poverty, was named as his successor in a bid to quell the discord.

A surprise choice, Abiy’s first few months in office were marked by far-reaching changes, including the release of political prisoners, the unbanning of opposition and rebel groups and the peace deal with Eritrea. He also allocated half the posts in his cabinet to women, purged allegedly corrupt officials and began opening up the insular economy and courting international investment.

Yet the pace of change was too much for some, and tensions that were largely contained by the previous administration “have now exploded,” said Michael Woldemariam, an associate professor of international relations at Boston University. “Now, the reality of nation-building and resolving Ethiopia’s historical challenges are laid bare. Abiy, as popular as he was, could never deliver on all of the ambitions and promises.”

In his Nobel lecture last year, Abiy spelled out his vision of building a democratic and prosperous society that thrives on tolerance and understanding.

But harmony is elusive, with tensions flaring recently in the Tigray region, an ethnic conflict simmering in the Amhara region, and attacks and abductions perpetrated by militia groups in parts of Oromia showing no sign of letting up.

There is no indication that Abiy’s grip on power is under threat. He’s consolidated his support base under his new Prosperity Party, has the backing of the security forces and wields considerable control over the local media. Billene Seyoum, Abiy’s spokeswoman, downplayed the extent of the violence and said the country remains open for business.

“We have no illusions that this would be a smooth ride,” Abiy said in a speech to the United Nations this week. “We remain committed to the objective of democratization and will pursue our reform efforts with all the necessary political commitment.”

Abiy’s administration still needs to do more to foster reconciliation, since Ethiopia can ill afford continuing political instability given the other challenges it faces, said Abel Abate Demissie, an associate at Chatham House in London.

“The current bickering will lead to a serious political and security quagmire if it doesn’t abate soon,” he said by phone from Addis Ababa.

— With assistance by Jeremy Diamond, and Gina Turner