Home Ethiopia Ethiopia: The Addis Ababa Chamber of Commerce and Sectoral Association and its... 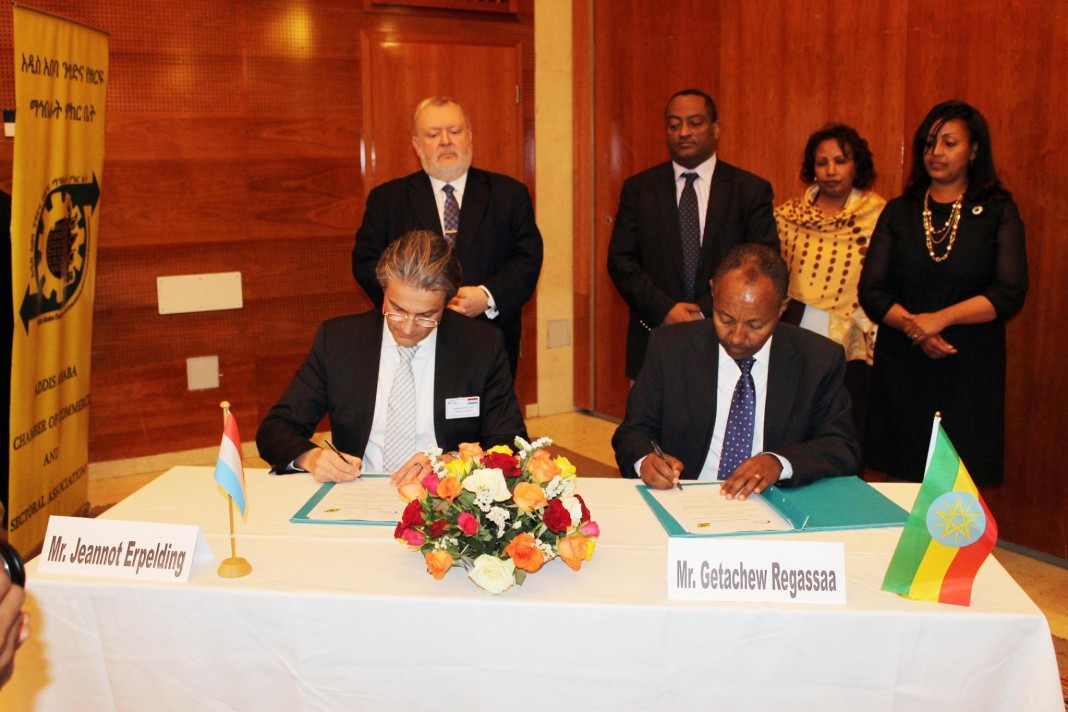 ADDIS ABABA (HAN) February 5, 2016 – Public Diplomacy and Regional Stability Initiatives News. The Addis Ababa Chamber of Commerce and Sectoral Association and its Luxembourg counterpart signed a Memorandum of Understanding (MoU) today (February 04) in Addis Ababa, Hilton Hotels. The signing of the MoU was made on the occasion of the Ethio-Luxembourg Multi-Sectoral Economic Forum which is being held between 3-6 February, 2016 with the attendance of senior government officials, stakeholder and partner institutions and more than hundred pioneer business and investment companies from both countries.

In his opening remarks State Minister of Foreign Affairs of Ethiopia H.E. Regassa Kefale expressed his pleasure of welcoming deliberations that would enhance the Ethiopia-Luxembourg business and investment ties and hailed the Luxembourg Chamber of Commerce, its Ethiopian Counterpart and Ethiopian and Luxembourg Embassies in Brussels and Addis Ababa for the successful coordination of the forum. Seizing the opportunity to express the impetus the Forum adds up to Ethiopia and European Cooperation, the State Minister reiterated Ethiopia has long standing and thriving partnership with European countries, and this mission, he said was yet another testimony of the fact that European countries are going beyond development cooperation to extending business partnerships as well.

State Minister Regassa further stated Luxembourg is one among centers of financial services and satellite links, adding that the country’s advanced and wide service sector would render a lesson to the Ethiopian side. Recommending the need to improve trade links between the two sides both in volume and variety, the State Minister presented a conducive investment and Business environment and offered potential and market access preferences including AGOA (African Growth Opportunity Act), COMESA (Common Market for Eastern and Southern Africa) Countries, and EBA (Everything But Arms) among others. The State Minister added Ethiopia has just embarked on its Growth and Transformation Plan II (GTPII) with a priority to transform the economy more widely from Agriculture based towards industrialization particularly emphasizing on sectors like textile, leather, food processing, pharmaceuticals, electronics, etc. Those sectors he said would provide wide and diverse opportunities to establish partnership with foreign Investors including the Luxembourg business groups.

H. E Mr. Jeannot Erpelding, Director for the International Affairs of the Luxembourg Chamber of Commerce, praised the organizers of the Forum would serve to lay the framework to expand Luxembourg’s trade and investment to Africa, where in he noted one of those countries is Ethiopia. He said its economic and political stability, wide local and regional Market access and its overall partnership potential were the key reason for choosing Ethiopia as the right destination for business and investment. He said Luxembourg had a wide potential in sectors including logistics and infrastructure, Energy, communication technology, Banking and Finance, noting that Luxembourg is known to have an open market for foreign investors and exporters. Foreigners and foreign investors he said accounted for 40% of the Luxemburg’s half a million population. MFA