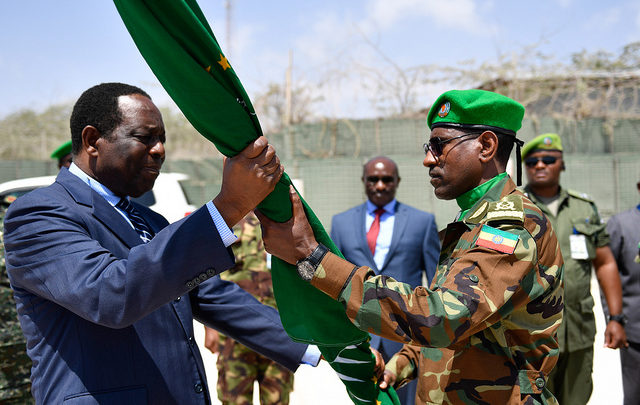 The Amisom command is rotational among countries that contribute troops to the volatile Horn of African nation. Uganda has been in overall command since January 2018.

While presiding over the handover ceremony in Mogadishu on Thursday, the head of Amisom, Mr Francisco Caetano Madeira, said there was still a big task for the forces to defeat Islamic militants, the Al-Shaabab.

“There is work to be done,” Mr Madeira told Gen Tigabu, according to a statement on the Amison website.

“The task ahead is enormous, but I am very confident that you can do it,” he added.

Mr Madeira commended Gen Owoyesigire for “sharing all his knowledge” to push forward Amisom’s mandate. He described the outgoing force commander as an “extraordinary officer”.

Gen Tigabu who has 34-years’ experience in the military having served ENDF in several capacities, including as division, brigade, battalion, and Company Commander, described his new tour of duty as challenging.

“This Mission is a challenging one, but we are up to the task,” Gen Tigabu said.

The 59-year-old has been the commander of Jinja based, Uganda Rapid Deployment Capability Centre.

Gen Tigabu has also served as a member of the Ethiopia Defence Council. He holds a Masters degree in Business Administration, a degree in Leadership and Military Science and a Diploma in Law.