Home Ethiopia Ethiopia: Speaker of the House of Federation is Lobbying in Canada 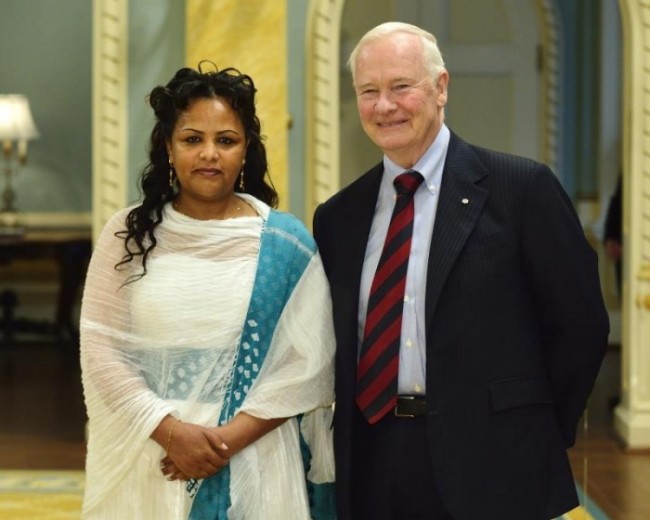 Toronto (HAN) September 15, 2014 – Public diplomacy and Diaspora news International. According to Geeska Afrika Online reporter in Toronto, Canada, the Ethiopian delegation lobiying in Canada through Ethiopian diaspora communities, led by Ato KassaTekle-Berhan, Speaker of the House of Federation; and including AlemayehuTegenu, Minister of Water, Irrigation and Energy and FitsumArega, Director General of the Ethiopian Investment Agency; has met with the Ethiopian Diaspora community in Toronto. Also present were Ambassador Birtukan Ayano, Ambassador of Ethiopia to Canada, other diplomats and business persons.

Speaker KassaTekle-Berhan briefed the Diaspora members on current affairs, national renewal activities, and the successes and challenges facing the nation. He noted that Ethiopia had made impressive advances in various areas, including education, human and institutional development, infrastructure development, and in reducing infant and maternal mortality rate.

Speaker of the House of Federation pointed out that the right mix of policies and strategies and the practical implementation of numerous development projects had made Ethiopia a nucleus of investment and allowed for the massive infrastructure projects and one of the most substantial developments of human resources in Africa.

Speaker of the House of Federation  said that the current situation in Ethiopia featured the concept of self-development, adding that the people’s strong commitment to self-development and their ongoing engagement in education and other sectors had contributed significantly to the remarkable achievements gained. He stressed the need to build on these achievements and sustain momentum. Alemayehu Tegenu stressed that Ethiopia had entered a new stage of energy infrastructure development aimed to intensify the spirit of development and sustainability.

Speaker of the House of Federation added that Ethiopia stood ready to utilize renewable energy resources including the options of power from solar, wind, geothermal, biofuel and diesel, and even waste, reiterating that it was now a pacemaker fore the development of renewable energy in Africa. He also emphasized that the utilization of renewable energy sources would put Ethiopia’s future on a more secure footing.

The Minister said Ethiopia’s hydropower would provide the synergy for economic integration in Africa and beyond. With regard to the Grand Renaissance Dam (GERD), he said this demonstrated the will for win-win progress and the moves against poverty. Director-General Fitsum Arega briefed the meeting on the transformation of Ethiopia’s investment landscape, opportunities and selected priority areas. He noted that domestic development had become an important contributor to the creation of a favorable investment climate, and said this had injected a new impetus to make Ethiopia a new investment hub in Africa. After the presentations, question and answer sessions led to extensive deliberations on various issues of national concern.