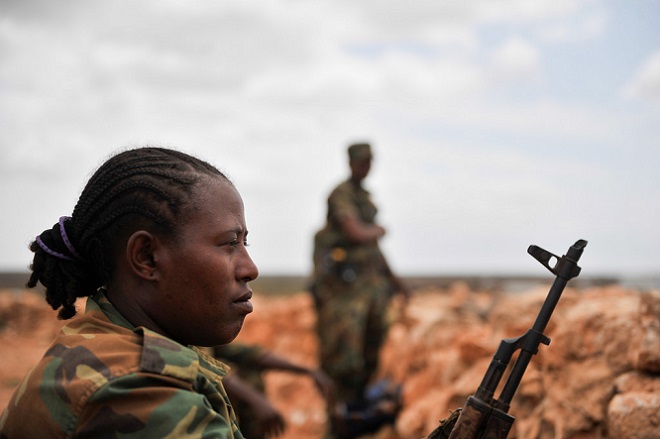 The militants were killed after attempting an attack on an African Union base in central Somalia where Ethiopian forces are mainly stationed serving under African Union Mission in Somalia AMISOM.

According to the statement, Ethiopian and Somalian forces jointly have foiled a planned Al-Shabab attack on Ethiopian forces on Thursday in Hiran region’s Halgan town, some 300km north of the capital Mogadishu.

Although AMISOM said it has foiled the attack, the Islamist militant group however alleged killing dozens of Ethiopian soldiers.

Al-Shebab’s claim has not yet been independently confirmed by AMISOM or the Ethiopian government.

According to the statement by the Ethiopian defence ministry, Al-Shabab attempted to carryout the attack in four directions, by using cars equipped with bombs.

Hundreds of Al Shabab fighters were also captured during the clashes.

Meanwhile the Chairperson of the Commission of the African Union (AU), Dr. Nkosazana Dlamini-Zuma, condemns in the strongest terms the failed attack.

The Chairperson commended the fast response exhibited by the Ethiopian contingent of AMISOM and the Somali forces in repulsing the attack.

“Attacks such as this further demonstrate the despicable nature of Al Shabaab, whose sole purpose is to spread terror and continue the destabilization of Somalia” She said.

“Our resolve can only be rejuvenated, to fight on until Somalia is freed of all elements of terror. She further stresses that the failed attack demonstrated AMISOM’s capability to respond effectively against this terrorist threat”

Ethiopia is one of the five countries contributing troops to the 22,000-strong AU mission in Somalia.

This the first time for an Ethiopian-run AMISOM base to be attacked by Al-Qaeda allied terrorist group.

Al-Shabab’s insurgency aims to topple the western-backed government and turn the nation in to an Islamic state.