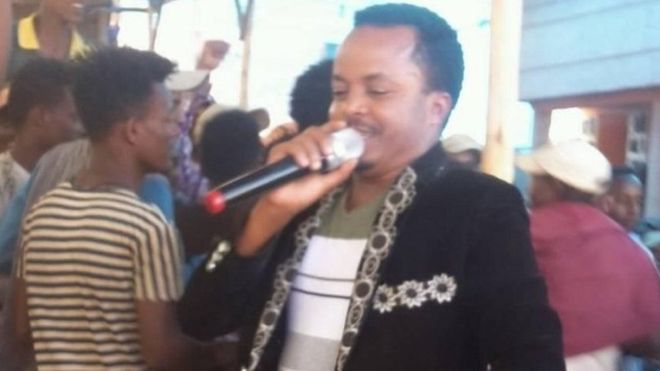 An Ethiopian singer has died after he was hit by a bullet fired to celebrate the opening of a new hotel.

Dadhi Gelan was performing in the hotel in Ashufe, a small town in Ethiopia’s Oromia region, when a stray bullet hit him, one of his friends told the BBC.

Dadhi was a prominent singer known for his political songs about the Oromo people’s campaign for greater rights.

Firing shots in the air during celebrations and at times of mourning is a popular tradition in the region.

Dadhi had just finished performing when the celebratory shots were fired, his friend, Tufa Wodoja, told the BBC.

People fled the scene after the stray bullet hit Dadhi, killing him on the spot, he added.

“While he was performing, everybody was firing. At least 50 to 60 live rounds were being fired per song,” Mr Tufa said.

“Prior to his death, Dadhi was saying to me, ‘Be careful, you might get hit by a bullet,'” Mr Wodoja added.

Dadhi was known for songs depicting the struggles of the Oromo people, often urging them to stand up for freedom.

He sang in the Afaan Oromoo language and was also an author of five books.

The firing of weapons is becoming a concern for the authorities in Ethiopia.

Earlier this month a groom and his best man were killed when a grenade belonging to the groom exploded during post-wedding celebrations.

Ethiopia has emerged from decades of autocratic rule following the rise to power of Abiy Ahmed, the first Oromo to become prime minister.

The Oromo are the largest ethnic group in Ethiopia. They have often complained of political and economic marginalisation.