Home Ethiopia Ethiopia signs an agreement for the establishment of a regional office with... 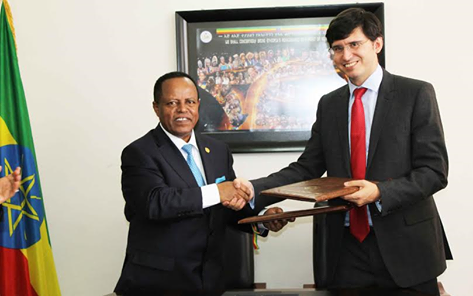 ADDIS ABABA (HAN) April 19, 2016. Public Diplomacy & Regional Security News. State Minister for Foreign Affairs Ambassador Taye Atske-selassie, and Country Head, Sebastien Frendo from Africa Governance Initiative (AGI) signed an agreement for the establishment of regional office for AGI here in Ethiopia today (April 19). Africa Governance Initiative is a non-profitable organization established by Tony Blair, its Patron and former UK Prime Minister, to ensure that governments in Africa are equipped to meet the next set of challenges and continue to accelerate their progress in areas of investment and industrialization. AGI’s Country Head in Ethiopia, Sebastien Frendo noted that the initiative had already started working with Ethiopian Investment Commission (EIC), Ethiopia Industrial Parks Development Cooperation (EIPDC) and Ministry of Finance and Economic Cooperation (MOFEC) with a focus on building capacity of the management and Public Private Partnership/ PPP. State Minister Ambassador Taye said that AGI is in line with the Government’s priorities in its Growth and Transformation Plan (GTP II) which aimed at buttressing the manufacturing industry. Ambassador Taye added, the agreement would give AGI a legal standing to operate in the country in its full potential. AGI works with other six African countries; Guinea, Kenya, Liberia, Nigeria, Rwanda and Sierra Leone.