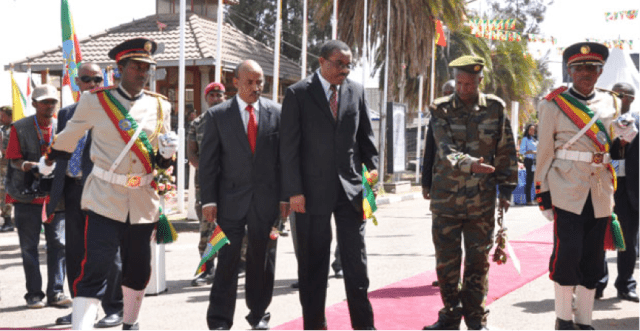 Addis Ababa (HAN) April 17, 2014 – Ethiopian Defense Ministry fully prepared to protect the The Grand Ethiopian Renaissance Dam (GERD) from any external attack, according to the Minister of Defence, Siraj Fegessa, giving the Ministry’s six-month performance report to Parliament this week said the country was a policy of co-existence and development which had shown successful results.

In implementing this policy, he said, the Ministry had signed bilateral agreements with 14 nations in military diplomacy.

He said that “Giving priority to neighboring countries, we have made agreements with nations in the region to prepare a joint plan aimed at ensuring and safeguarding our common borders, save with Eritrea. The agreements include working jointly in the field of education, training, experience sharing, and on common issues to work together on peace and security demands in the region.”

In his report, the Minister noted that the Ministry had signed an agreement with the Sudan to promote the common interest of the two countries and to keep all cross-border areas safe, adding that “we are working together to form a joint military force”, to tighten security along the common border of the two nations from any external aggression and potential threats. Answering questions, he said the Ministry was fully prepared to protect the Grand Ethiopian Renaissance Dam (GERD) from any possible attack, but said that he did not believe there would be any direct attack on the dam.