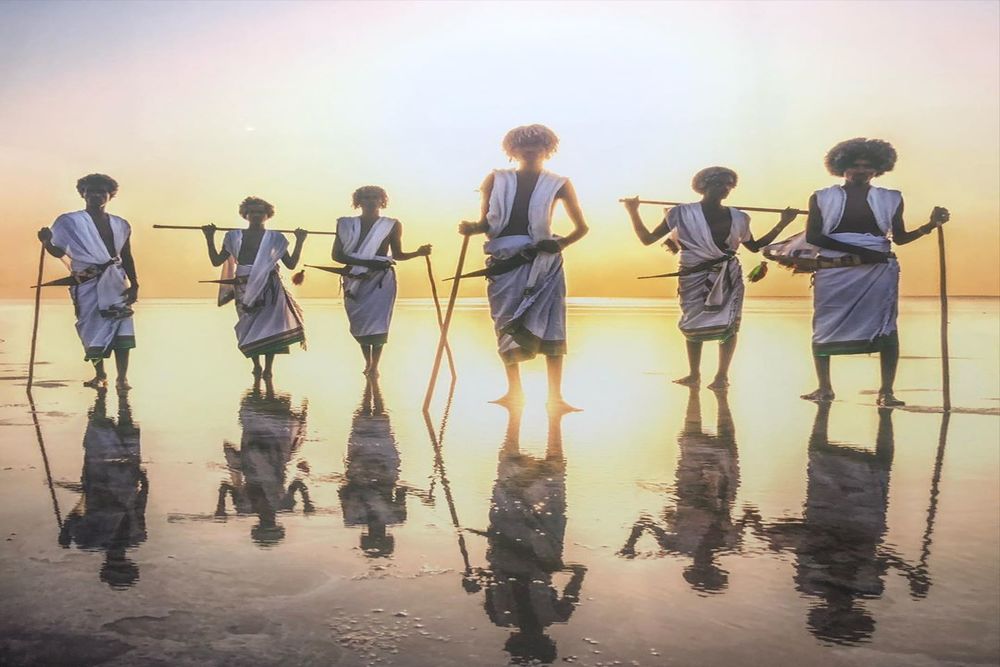 My three-wheel Bajaj taxi, powered by what sounded like a lawn- mower engine, had somehow managed to bounce along the undulating dirt track through the scrub and weave around the plodding camels without toppling into the river flowing beside us.

But it had had to halt at a checkpoint where two young Afar warriors peered in, each with an AK-47 nonchalantly hanging from a shoulder and an enormous knife-bearing scabbard at the waist. They told my guide, squashed beside me, that the Awash River had flooded the road further on.

As we set off bouncing back the way we came, I looked back, wondering whether the Afar guard’s intense-looking stares following us represented curiosity, aggression or bafflement at my presence.

Ethiopia’s remote northeast Afar Region remains characterized by an infamous history and reputation. Most mentions of the Afar in literature or media, of the few there are focus on the region’s Danakil Depression – the hottest place on earth where temperatures in the naked plains frequently soar above 50 degrees, exacerbated by the fierce blowing of the Gara, which translates as Fire-Wind.

Or they focus on the Afar people’s ferocity and intolerance of outsiders, once accompanied by a habit of cutting off the testicles of any foreigner found in their territory. The famous explorer Wilfred Thesiger avoided such a fate when he encountered the Afar in the 1930s during his exploration of the source of the Awash River, though he describes some tense encounters.

I had a much easier time than Thesiger or many other foreigners preceding me, encountering another side to the Afar region and its people, far removed from the stereotypes usually presented.

Undoubtedly a proud people – the Afar regard themselves as the oldest of Ethiopia’s ethnic groups having occupied their arid homeland for at least 2,000 years – the majority of Afar I engaged proved friendly, while patient about my photographic requests.

Despite the winning smiles, you sense a robust mentality among these people, shaped by a tough nomadic pastoralist past that continues, with lone men guiding camels across plains rippling in the heat haze.

At the same time, many Afar are increasingly drawn to the urban hubs of the region. The small town of Asaita is an absolute delight, a lush peaceful enclave beside the Awash River cutting a green swathe through the desert, evoking Egyptian pastures watered by the Nile.

Clambering up a wooden ladder to the roof of the Basha Amare Hotel I secured a commanding view over the river, as various birdlife rode the thermals at eye level or came to rest on the hotel roof before launching again.

Despite the Muslim character of Asaita and the Afar region, Berhanu, the hotel’s owner, came from Ethiopia’s Tigray Region and so was Orthodox Christian – hence cool Harar beers were on hand for a string of sundowners as the sky filled with various hues.

In the far distance, where the greenery sustained by the Awash begins to fade and yellow, a giant sugar factory glinted in the gathering gloom as its lights came on. It seems there is no longer any part of Ethiopia immune to the country’s strides to boost its economy.

The trucks continued throughout the night and were still motoring come sunrise.

This is also well illustrated in the more boisterous city of Logiya, an hour’s minibus-ride from Asaita, where the old and new in Afar coexist more explicitly.

At sunset amid roadside market stalls taking advantage of cooler temperatures luring locals outside, I squatted on a low stool at a small open-air tea stand as a Muezzin called from a nearby mosque and trucks trundled down the city’s main drag on the way to and from ports in Djibouti across the border.

The trucks continued throughout the night and were still motoring come sunrise, as cafes opened for breakfasts of fuul, a spicy fava bean stew, and shoeshine boys got busy.

The Afar is far from the strange and terrible place it was once portrayed as, while illustrative of the resilience of ancient traditions in a modernizing Ethiopia.