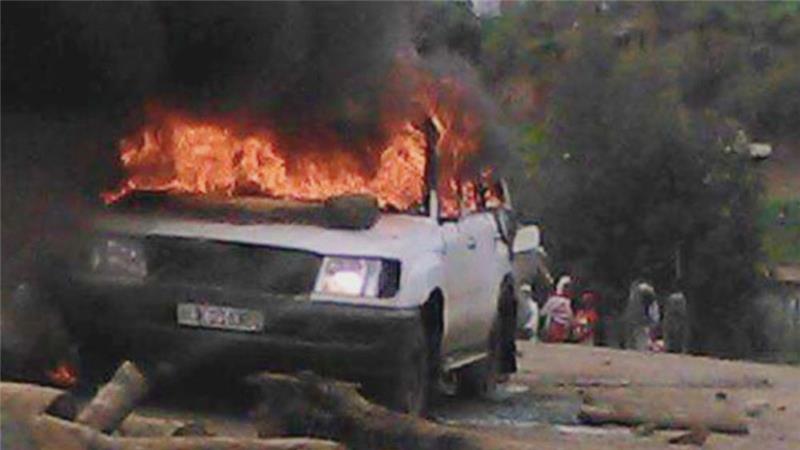 Unconfirmed reports claim at least eleven people, six of them police officers, have been killed in the last two days in Gondar city and its environs in Northern Ethiopia. The incident followed a confrontation between members of the “Wolkayit committee” and the police, as the later attempted to arrest some members of the committee, a university student from Gondar University, told Addis Standard over the phone.

The National Intelligence and Security Service and Federal Police Joint Anti-Terrorism Taskforce told state affiliated FBC yesterday that they have “detained individuals [who] were operating [in] areas called Soroka and Kurbi in north Gondar zone, Amahra regional state, and at Densha and its environs in western Tigray zone.” The task force also blamed individuals as having been “terrorist forces” operating from neighboring Eritrea.

But our source, who wants to be anonymous for “fear of retaliation”, said tensions began running high following intensive searches conducted by police forces in the last ten days to arrest members of the “Wolkayit committee” who have been protesting against the government’s decision to administratively include the Wolkayit community and its land into the neighboring Tigray Regional State. He added that searches are being conducted in most parts of the city “as we speak” and that the people targeted were “clearly” members of the “Wolkayit committee”.

The statement from the task force admitted “three members of the taskforce were killed and five others injured during a fire exchange held” between the police and supporters of an individual wanted for crimes involving robbery and the killing of civilians in the area. “A person was also killed during the fire exchange.” But our source said close to a “dozen people, including six police officers” were killed in the last two days. He also said that tensions were running high between Tigrayan and Amhara residents of the town in what he sees as a “dangerous ethnic confrontation.” “Some Tirayan students are considering leaving campus because they are afraid that they might become targets of the ethnic confrontation,” he said.

Pictures circulating on social media show a bus and a couple of cars belonging to the regional government burning. Addis Standard couldn’t independently verify these pictures. However, Yesterday’s statement from the task force admitted that several business establishments were vandalized and property damaged.

In what several members of the Wolkayit community in north western Ethiopia say was a forced decision by the federal government, the Wolkayit people were made to join the Humera administrative zone in Tigray regional state following the ethnic based federal arrangements of the early 1990s. However community members continue protesting saying the decision was not only an administrative decision but also one that affects their question of identity.

In the last two decades therefore members of the Wolkayit community were demanding both the federal and the regional governments to join the Amhara regional state; they also say they identify themselves as Amharas and not Tigrayans. Both the federal and regional governments insist the Wolkayit question has been answered once and for all. In February 2016, the people of Wolkayit were paraded in front of the national TV carrying placards that declared all their questions, including their questions of identity, as have been answered once and for all.

Last year a group of people who call themselves as “Wolkayit committee” travelled to Addis Abeba to file the community’s demand to Ethiopia’s House of Federation (HoF). However, several of them were arrested. The identity question of the Wolkayit people continued to intensify as Ethiopia is facing similar questions from various parts of the country.

But in what came as ‘surprising’ to our source, the statement from the National Intelligence and Security Service and Federal Police Joint Anti-Terrorism Taskforce failed to make any connection between the unrest and the Wolkayit community’s demands. It said, instead, that the individuals were connected to armed terrorist organizations operating from Eritrea and were wanted for armed robbery, hostage taking and killings of civilians over the last week of June. Yesterday, another statement from the task force says one of the two ‘ringleaders’ on the police wanted list has given himself up to the police. It also said only one civilian was killed in a crossfire.

Following the incident, which sparked a city-wide protest in the last two days, “Gondar is tense”, our source said, adding several businesses have also remained closed.