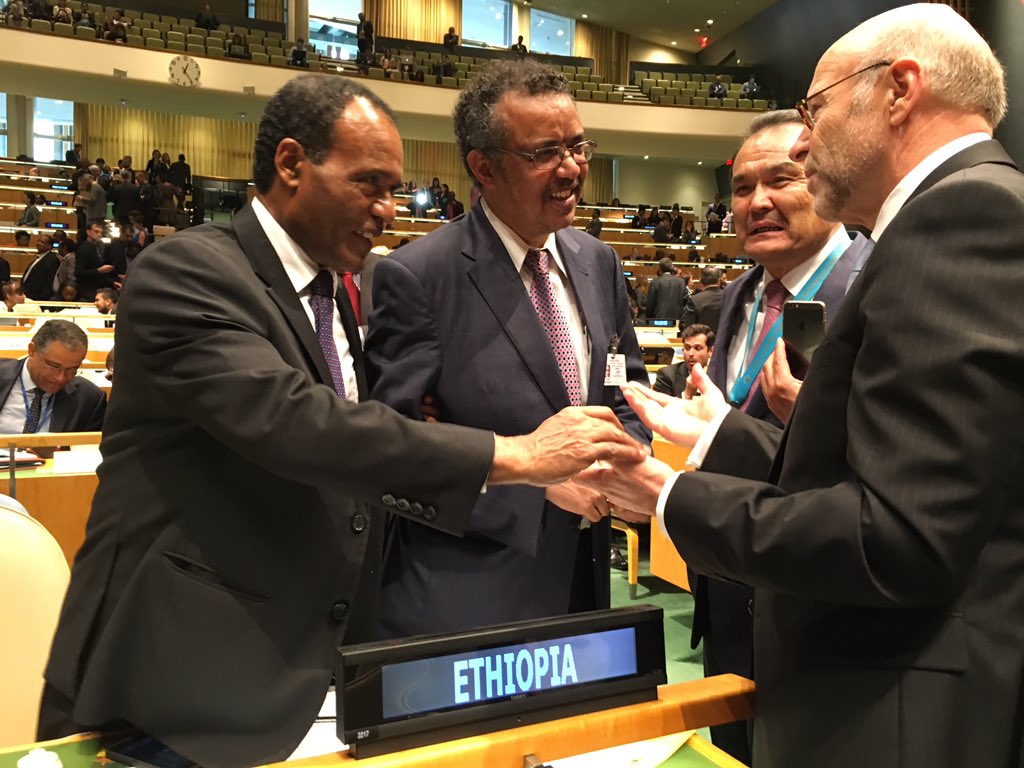 In one round of voting the United Nations General Assembly elected Ethiopia to serve as non-permanent members on the Security Council for two-year terms commencing on 1 January 2017.   The election of five non-permanent members of the United Nations Security Council was held today on 28 June 2016 during the 70th session of the United Nations General Assembly in New York. The candidates from four different regions presented for the election were Ethiopia and Bolivia running on a clean slate basis from the African and the Latin America and Caribbean Groups respectively; Italy, Netherlands and Sweden, competing for two seats for Western Europe and others Group; and Kazakhstan and Thailand competing for a single seat for Asia and the Pacific Group.  As per the rule 92 of the rules of procedure, the election was held by secret ballot and there were no nominations. Therefore, under rule 83 of the rules of procedure, the non-permanent members of the Security Council were elected by a two-thirds majority. Accordingly, the 193 members of the United Nations General Assembly elected Ethiopia with 185 votes from the African Group, Bolivia with 183 votes from the Latin America and the Caribbean Group, Kazakhstan with 113 votes from Asia and the Pacific Group and Sweden with 134 votes from European Group. Since Italy and the Netherland couldn’t attain the two-thirds majority vote needed, the two countries have proposed to split a two-year term on the UN Security Council.

In accordance with the United Nations Security Council’s rotation rules, out of the ten non-permanent seats rotating among the various regional blocs, three are allotted to Africa. Thus, a single seat comes for an election every even calendar year whereas two seats are up for the grab during odd years. Due to the African Group’s established mechanism of rotation among its five sub regions, elections for the African seats tend not to be contested. Hence, Ethiopia was running uncontested for the Eastern African seat, with the full backing of the African Group which was endorsed during in 26th Assembly of Heads of States and Governments of the African Union’s in January 2016.

As it is widely known, Ethiopia is one of the founding member countries of the United Nations. It has contributed a lot for the realization of the principles of the UN Charter. Yet, as startling as it may sound, to date, it has only served on the Security Council for two times, 1967-1968 and 1989-1990. This week’s elections have proved that the 193 member states General Assembly with a majority vote have given Ethiopia its assent to serve on the council for a third term after twenty six years of absence. The election is a clear indication of Ethiopia’s ever growing reputation for the maintenance international peace and security.

Ethiopia has actively been taking part in United Nation’s earliest peacekeeping operations in the 1950’s and 1960’s. Better yet, currently with 8321 military and police forces on duty, it remains to be the single most troop contributing nation to UN peacekeeping missions in the world. Not just only in peacekeeping, by playing a key role in the areas of peacemaking, Ethiopia is also keeping a close tab on the peace and security of the continent. Along with the auspices of the IGAD and the African Union, the coordination and leadership it has demonstrated in the peaceful resolution of the crises in South Sudan, Somalia and Burundi are just cases in point.

The newly elected five non-permanent members elected on Tuesday 28 June 2016 will serve until 31 December 2018 by replacing the outgoing Angola, Malaysia, New Zealand, Spain and Venezuela that will finish their two years term at the council by the end of 2016.