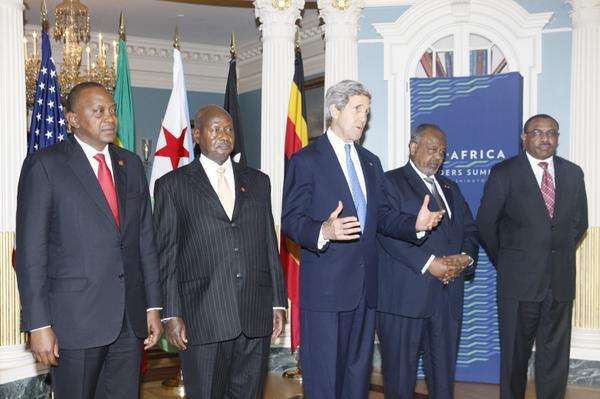 Remarks With IGAD Leaders After Their Meeting

SECRETARY KERRY: Thank you very much. It’s my pleasure to be here with the IGAD leaders: the presidents of Kenya, of Uganda, and Djibouti; and the prime minister of Ethiopia, who is the chair of this effort. And we just met with respect to the situation in South Sudan, and there is a unanimous agreement that this war must end and must end now. These leaders will go back to their region and meet in Addis Ababa very, very soon, where they will decide on specific actions that they are prepared to take in unanimous fashion with their countries in an effort to guarantee that the war comes to an end. They are prepared to issue a final ultimatum to the parties to come to the table, and in addition to that, the United Nations Security Council will be visiting – the entire Security Council – next week to make it clear there is no other alternative except to proceed with the plan of these leaders that they have put on the table.

The United States is fully supportive of that effort, and we will do everything in our power to make a difference. There’s a threat of starvation for 50,000 children, there’s a continued threat to life, there is a tribal series of attacks on both sides taking place that is simply unacceptable. And I wanted to thank the leaders for their leadership. We applaud their initiative to find an African solution and to take the leadership, and we’re particularly encouraged by that.

I was just asked if it’s all right with everybody if the prime minister wants to say a few things as the chair.

PRIME MINISTER DESALEGN: Secretary Kerry, thank you very much for letting me speaking with IGAD leaders. We in the IGAD region and leaders have agreed that the war has to stop and stop very, very quickly. And the region has come a long way in sorting out the problem, and to solve this problem we will stand together. And in this regard, we have come to the end now. The violation of the ceasefire has taken place by Riek Machar.

And so the region has put the comprehensive solution to the government of transitional national unity, which is going to be established in South Sudan. And both parties has to agree to this proposal of the region. And I think if the parties do not agree on the proposal that the region has put in place after studying (inaudible) circumstances in South Sudan, then the region is going to take strong action, as we have put in the IGAD summit – punitive action that has to be taken immediately after convening the meeting of IGAD heads of state and government in Addis Ababa very soon after this summit.

So the region has come to the climax and the human catastrophe has to stop. In this regard, we are ready to propose our proposal, and if they agree, then your ambassador will come to South Sudan. If not, then the region is going to take strong action.

SECRETARY KERRY: Thank you, Mr. Prime Minister. Thank you very much. Thank you all.