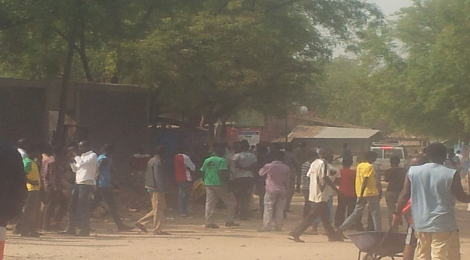 It is with deep sadness that we learned that the Ethiopian government has once again embarked on carrying out a massive massacre of unarmed Anuak civilians in Gambella town of southwest Ethiopia, using similar killing style of 2003. Unlike the December 2003 – which involved Ethiopian highlanders’ civilians, this time, the Ethiopian government used South Sudanese ethnic Nuers to carry out the genocide.

For the last three months, the Governor of Gambella region Mr. Gatluak Tut – who by nationality is a South Sudanese Nuer, with the knowledge of Ethiopian government, brought many guns to Gambella town from the Sudanese Nuer rebel base of Dr. Riek Machar Teny. These guns are distributed to all Nuers living in Gambella town in preparation to commit such mass genocide-plan. What availed itself on Wednesday January 27, 2016 around 2am and continued up to-date is the execution of such an atrociousness plan. Clearly, the plan was coordinated, and it was a combination of a strategic long-term plan by the EPRDF/Ethiopian government, South Sudanese Nuers, and their rebel leader Dr. Riek Machar Teny to kill all Anuaks living in Gambella town.

The Gambella People’s Liberation Movement (GPLM) strongly condemned this atrocity committed against our people by foreign forces with the support of the Ethiopian government and security organs. We believe such use of foreigners to kill Ethiopian nationals by the very government supposedly to protect them not only a violation of the country sovereignty and the constitution, but also is a violation of international law in the states obligation to protect it own citizens.

Thus, we calls on:

• International community to pressure the Ethiopian government to stop indirect and direct killing of Anuak civilians;
• To establish independent inquiries to investigate the massacre currently taking place in Gambella;
• The United States government and the Europeans community to pressure the Ethiopian government to desist from committing current genocide on our people;
• The United Nations and members nations, the African Union, in the East African countries to instruct the South Sudanese Nuer rebel leader Dr. Riek Machar Teny to immediately stop supplying his Nuer tribe with deadly weapons to be used against unarmed Anuak civilians and creating instability in Gambella.
• Unconditional remove and transfer South Sudanese Nuers out of Gambella immediately;
• Finally, calls on government of EPRDF to stop its divide-and-rule politics in Gambella.