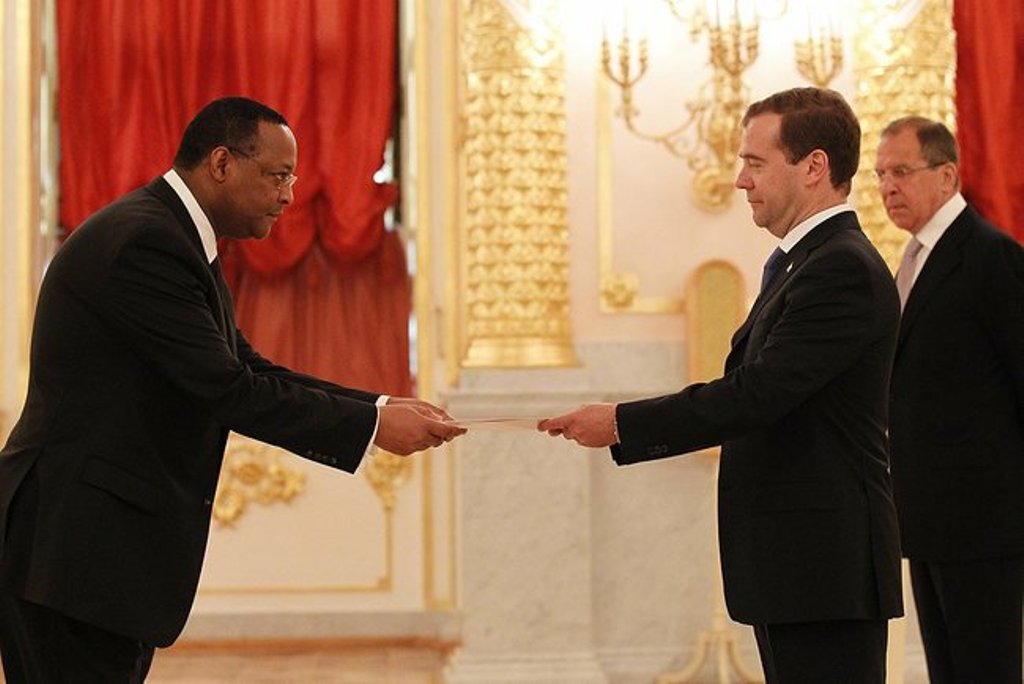 Addis Ababa (HAN) September 16, 2014 – Public diplomacy and International strategic news. A high level delegation of Russian companies led by the Russian Foreign Minister, Sergey Lavrov, will visit Ethiopia on Wednesday, September 17. Sources told Capital that Lavrov will come to Addis Ababa for a one-day official visit. The purpose is to strengthen economic and political ties between Ethiopia and Russia.
According to the information obtained by Capital, Lavrov will meet with Prime Minister Hailemaraim Desalegn, Foreign Minister Tedros Adhanom (PhD) and other senior government officials and discuss bilateral issues. He is also expected to hold talks with Dr. Nkosazana Dlamini Zuma, Chairperson of the African Union Commission. He first came to Addis Ababa in 2006. There are currently more than 30 Russian companies investing in Ethiopia. Russian companies are also interested in the Ethiopian national railway network development. Russia is a major arms supplier to the Ethiopian army. The Ethiopian Air Force and ground forces are equipped with Russian military artillery.

Internationally: The Russians have decided to play an strategic role in accomplishing the TAPI gas line project and want to become part of a consortium which is to execute the project.Apart from it, Moscow has also clearly indicated to Islamabad that it wants the electricity trade project (CASA-1,000) to be extended to Russia as it is rich in electricity and is currently exporting power to Mongolia, China and Europe.

Russian Ambassador Tkachenko stated: “The visit aimed at strengthening our political cooperation and interaction and various bilateral areas .We are planning to discuss the full agenda of our bilateral relations and our cooperation on the international arena, of course we will discuss issues of economic cooperation in general and prospects of new bilateral agreements which will facilitate our cooperation in various fields.”

Russia is ready to execute the Pakistan-Iran gas pipeline project, ignoring the US sanctions on Iran, a Russian minister has revealed in a meeting with Pakistan’s petroleum minister in Islamabad this week.

According to Russian Ambassador Tkachenko, Russian energy and oil and gas company executives will be part of the business delegation that include officials from Gazprom. In July this year, officials of GPB Global Resources, a unit of Russia’s state-owned Gazprombank Group, said that the company may invest about USD 60 million searching for petroleum in northeastern Ethiopia. The company announced it won approval from the Ethiopian government for a production-sharing agreement that covers seven years for exploration and 25 years for production. Investment for exploration will focus on conducting surveys and drilling test wells in a 42,000 square kilometer (16,200 square mile) area in the Afar region that forms part of East Africa’s Rift Valley.

Russians are not new to the Ethiopian oil exploration sector. During the socialist era, Soviet Petroleum Exploration Expedition (SPEE) was prospecting for oil and gas in the Ogaden Basin in the 1980s. Russians were involved in the mining sector too. It was Russian Geological Survey that discovered the Kenticha tantalum deposit in Borena Zone, Oromia Regional State. They also discovered the Legedembi primary gold reserve, which MIDROC Gold is currently mining. Russian companies also want to develop hydropower projects in Ethiopia. Sources said the Russian delegation will meet the minister of Water, Irrigation and Energy, Alemayehu Tegenu, to discuss the investment opportunities in the energy sector.

Russians buy Ethiopian flowers from the Netherlands. Ethiopian Airlines is in the process of starting passenger and cargo flights to Moscow.
According to the official website of the Ministry of Foreign Affairs, Ethiopia and Russia have longstanding historical relations going back to the period of the Russian Czar Machilovich, the father of Peter the Great, in the 17th century. Historical records indicate that Alexander Pushkin, a renowned Russian writer, was a grandson of Abraham Hannibal, an Ethiopian who was presented to Peter the Great by Suleiman the Magnificent. He was baptized in Vilnius, Lithuania, by Peter the Great on his return from defeating the Swedes. Other early contacts between Russia and Ethiopia include the visit of an Ethiopian delegation sent by the Emperor Menelik II to Russia, and visits of several Russians to Ethiopia during Menelik’s reign, at least one of whom was given the title of Dejazmatch for his travels on behalf of the Emperor along Ethiopia’s southern boundaries. These contacts laid the foundation for close relations of the two countries, based on mutual respect and friendship between the two peoples. And it is notable that regardless of the differing political systems that existed at various times, relations between them have continued to be close and friendly.

One demonstration of that friendship has been that Russia has always, and without fail, stood with Ethiopia whenever the sovereignty of Ethiopia was threatened. Russian solidarity with Ethiopia was first illustrated when the Russian Red Cross Society came to Ethiopia in 1896, at the time of the Battle of Adwa when Italy attempted to attack the country. It made an outstanding contribution in the provision of medical supplies at Menelik Hospital and care to the Ethiopian patriots on the battlefield and subsequently. Again, during the fascist invasion of Ethiopia in 1936, Russia was one of those countries which stood in solidarity with Ethiopia. It has done so on every occasion throughout the 20th century whenever Ethiopia faced challenges to its sovereignty and its core national security interests. In short, the bonds that exist between Ethiopia and Russia have stood the test of time and have proven their strength time and again.

Ethiopia and Russian Diplomatic trips:  there have been increased visits of high level officials between the two countries. Major visits have included former Prime Minister Meles Zenawi’s trip to Moscow in December 2001 and the then Foreign Minister Seyoum Mesfin in November 2007.  Prime Minister Hailemariam Desalegn (the then Deputy Prime Minister and Minister of Foreign Affairs) and Alemayehu Tegenu, Minister of Water, Irrigation and Energy, visited Russia in August and October 2011 respectively. From the Russian side former Russian Prime Minister, Mikhail Kasyanov, came to Ethiopia in September 2002; and Russian Foreign Minister Sergey Lavrov came here in September 2006.

Photo: According to tradition, the Russian Foreign Minister Lavrov stands next to the President as new Ethiopian Ambassador is accepted.