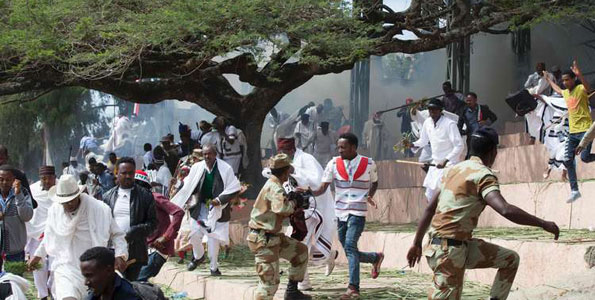 Nairobi (HAN) November 3.2016.Public Diplomacy & Regional Security News. Oct 3, 2016 faced with its most serious challenge yet, the Ethiopian regime, a crucial Western ally in the fight against terrorism, risks a deepening crisis if promised reforms do not come, researchers and analysts warn.

A nationwide state of emergency since October 9 combined with the mass arrest of more than 2,500 people has suppressed months of widespread and sometimes deadly anti-government protests.

Mobile internet and the social networks used to mobilise protesters have also been blocked as the government seeks a decisive end to the unrest.

“Violence has-been controlled,” government spokesman Getachew Reda said last week. “What we have is a more or less stable situation.”

The challenge to the government has been strongest in the Oromo and Amhara regions which together account for over 60 percent of the population and these areas are now in a siege-like state.

“The government wants to show its strength. The state of emergency has a psychological impact by increasing the feeling of fear and insecurity among the population,” said Rene Lefort, an independent Horn of Africa researcher.

Too little change, too slow

But force alone will not solve the underlying problems and Lefort said he is “sceptical about the ability and willingness of the regime to open up” raising fears that in the absence of concessions to the protesters, the situation will worsen.

Prime Minister Hailemariam Desalegn has offered to reform the winner-takes-all electoral system which has allowed his ruling Ethiopian People’s Revolutionary Democratic Front (EPRDF) coalition to win every seat in parliament in the 2015 poll.

But even if reforms come, they will not take effect until the next election due in 2020, while a proposed government reshuffle has yet to be carried out.

Jean-Nicolas Bach, an Ethiopia specialist and director of Sudan’s Centre for Social, Legal and Economic Studies and Documentation (CEDEJ-Khartoum) said the EPRDF is committed to its own continuity and may not be capable of adequate change, citing its “hegemonic ambitions and authoritarian mode of government”.

“The goals of the EPRDF have always been clear: maintain power to take the country on the path of development. As for democracy, it will come when it comes,” Bach said.

The regime, led by former rebel commander and strongman Meles Zenawi from 1991 until his death in 2012, is credited with real economic progress that saw a decade of around 10 percent annual growth while infant mortality and malnutrition was halved over the same period, according to figures from the World Bank.

But development has been accompanied by a squeezing of political space, disregard for human rights and a growing outcry at alleged government corruption.

“We need to change the rules that give impunity to local officials and better checks on officials,” said Daniel Berhane, founder and editor of Horn Affairs, an online magazine.

He suggested that every “kebele”, or neighbourhood, hold meetings “to gather public grievances” at the grassroots level which can be relayed to central government “without any editing”.

Berhane said the EPRDF’s total victory in the May 2015 election left some feeling “disenfranchised”, especially in parts of the northern Amhara region and central-western Oromo region where the opposition had hoped to win seats and some power.

“Not surprisingly, these two areas are the epicentres of the protests,” he said.

The brutal repression of the protest movement human rights organisations say several hundred have been killed by security forces combined with lack of any political change triggered an explosion of violence in recent weeks, seriously undermining Ethiopia’s reputation as a stable country.

The image of foreign farms and business going up in flames after being set alight by protesters has put off investors.

“The protests have significantly undermined the ruling coalition and genuine stability will take years to recover,” said Emma Gordon, an analyst at Maplecroft Verisk, a risk management firm.

“Until then, further divestments, particularly by Western agribusiness firms, are likely to be announced.”

The most likely scenario, said Gordon, is a continuing weak but persistent challenge to government authority because, the “proposed reforms are unlikely to fully satisfy” opponents.
Protesters want “more sweeping concessions” to reduce the dominance of the minority Tigrayan leaders in the EPRDF and for security forces to be reined in, but none of this is on the table meaning, Gordon said, another eruption of protests is likely, “in relation to military deployments or evidence of continued restrictions on the political opposition.”