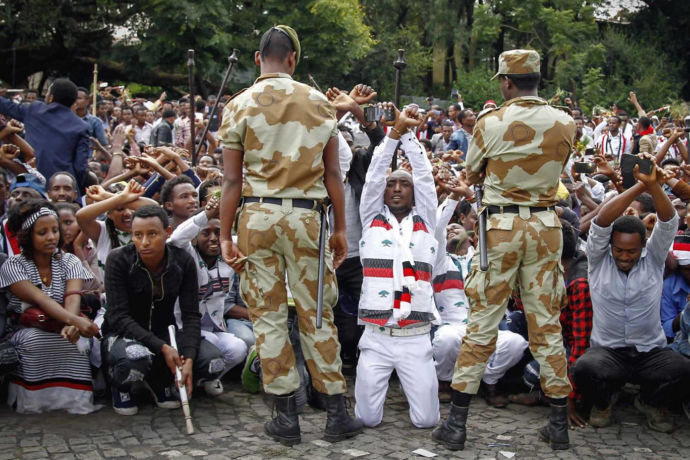 The Ethiopian government imposed a six-month nationwide state of emergencyon October 9 after months of protests by members of the country’s two largest ethnic groups, the Oromo and the Amhara. Civilians are restricted from contacting so-called “outside forces” on social media and from organizing demonstrations at schools or universities, among other prohibitions.

Defense Minister Siraj Fegessa said Sunday that the detainees—who were suspected of taking part in violent demonstrations—had been freed after receiving education and counseling, Ethiopia’s state-run Fana Broadcasting Corporation reported. Fegessa declined to confirm the total number of people arrested, but also said that 1,500 illegal weapons had been seized.

Defense Minister Siraj Fegessa said Sunday that the detainees—who were suspected of taking part in violent demonstrations—had been freed after receiving education and counseling, Ethiopia’s state-run Fana Broadcasting Corporation reported. Fegessa declined to confirm the total number of people arrested, but also said that 1,500 illegal weapons had been seized.

Security forces had arrested around 2,600 people as of October 20 under the state of emergency, the BBC reported.

The government imposed the state of emergency after deadly clashes between protesters and security forces. It came shortly after the Irreecha religious festival in Bishoftu in the Oromia region on October 2. More than 50 people were killed in a stampede at the festival, which protesters blamed on security forces using tear gas and firing rubber bullets.

Since the protests began in November 2015, at least 500 people have been killed. The demonstrations were sparked by government plans to expand the territory of the capital, Addis Ababa. The plans have since been dropped. The Ethiopian government has blamed outside forces—including Eritrea and Egypt—for sponsoring the violence. Both countries have denied the allegations.

“Ethiopia’s state of emergency bans nearly all speech that the government disagrees with anywhere in the country for at least six months,” said Felix Horne, senior Africa researcher at HRW. “The state of emergency hands the army new sweeping powers to crack down on demonstrators, further limiting the space for peaceful dissent.”

Ethiopia has been ruled by the Ethiopian People’s Revolutionary Democratic Front (EPRDF) since the early 1990s, when it toppled the Communist regime of Mengistu Haile Mariam. The EPRDF is dominated by members of the Tigray ethnic minority and is seen as biased against other ethnic groups, including the Oromo and Amhara. The ruling coalition also controls 100 percent of the country’s parliamentary seats, leading to a lack of credible opposition.`
During a recent visit to Ethiopia by German Chancellor Angela Merkel, Ethiopian Prime Minister Hailemariam Desalegn promised to revamp the country’s political system.