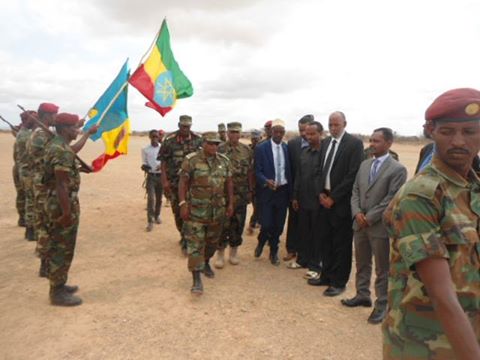 Addis Ababa (HAN) August 21, 2015 – Public Diplomacy and Regional weekly Security Initiatives update. By Gebre Selassie Araya. Scholars studying conflict agree that internal conflicts have different categories based on their causes and dimensions. These categories include conflicts triggered by ‘bad domestic problems’, such as socio-economic and political grievances; conflicts based on ethnicity and geographical disputes; conflicts at ‘mass-level’, with external actors at stake. The last type of conflict is characterized by problematic spillover creating internal and cross-border insecurity and refugee overflow further regionalising the problem.

While refugees have security, economic and social consequences in the hosting countries, it is obvious that local conflicts have a ‘spill over’ potential in creating military problems for neighboring states. For example, in addition to the infiltration of terrorist elements, light weapons can be shipped to rebel groups in neighboring states and rebel groups can use territories of neighboring states for military operation or sanctuary or else use it to attract international attentions to their cause.

In this case, Somalia’s conflict is mainly characterized by both typologies of conflicts. This conflict broke out primarily because of ‘bad domestic problems’ and gradually transformed into a context of “mass-Level” conflict involving of multiple domestic and international actors, including regional states as well as non-state identity groups. In the absence of central state, Somalia has witnessed periods of anarchy and ferocious armed conflict among various factions (both clan and political groups, Islamist Jihadists). And already in mid-1990s, some of Somalia’s factions have attempted to forge alliance with external states (Eritrea, Qatar, Arab Emirates, Mubarak’s Egypt, and Gadafi’s Libya) and non-state actors (religious extremists, such as al-Qaeda and Taliban affiliated elements etc.) posing a new context on the region including the nearby ocean and the Gulf of Aden.

Moreover, the anarchy in Somalia has been a fertile ground for various criminal elements (e.g. piracy) and Ethiopian separatist groups, such as OLF and ONLF of the Ogden both fully supported by Eritrean government backing a proxy war, which Ethiopia managed to neutralize and crush it shortly. As reported, the the UN Monitoring Group on Somalia finds that Eritrea had ‘provided political, financial and logistical support to armed groups in Somalia’. And as a result the UNSC imposed sanctions/arms embargo on Eritrea – a rogue state, which still hosts some dysfunctional Ethiopian opposition groups determined to topple the constitutionally elected government in Addis Ababa using any means necessary.

And since Ethiopia shares the most volatile border with Somalia, its intervention is borne out of insecurity of cross border infiltrations of refugee, terrorist elements who bombed many places in Ethiopia and other military problems. Therefore, Ethiopia’s involvement in the Somali conflict should be seen from the context of defensive intervention. Ethiopia as the most populous country in the region cannot afford ignoring the troubling situation in the neighbouring states; it should play its role to safeguard its peace and that of the region. Therefore, Ethiopia’s involvement in Somalia is a necessary evil.

However, the ‘Hobbesian remedy’ i.e. using force or military solution, alone cannot sustain peace; in fact it only freezes the problem for a certain period of time. It is therefore crucial that the international community (AU, IGAD, the UN, and others) should carry out a combination of measures including promoting dialogue among factions, taking serious humanitarian measures to reduce vulnerability of the population, and helping the extremely weak government in rebuilding Somalia and its institutions as well as its security apparatus.

Meanwhile, in order to improve the political and socio-economic situation in Somalia, the international community should carry out components of broader reconciliation process and peace building projects that fully involve the Somali civil society, local informal pressure groups and communities under the full ownership of the Somali people. This is the only permanent solution to have peace inside the country as well as in the region.

So far, the international community has wasted a number of opportunities failing to provide resources needed for extended interventions to bring about changes on the ground. In this case, there is a need for change of approach and sustained commitment to support the Somali people and the restoration of Somalia to its rightful place in the community of nations.