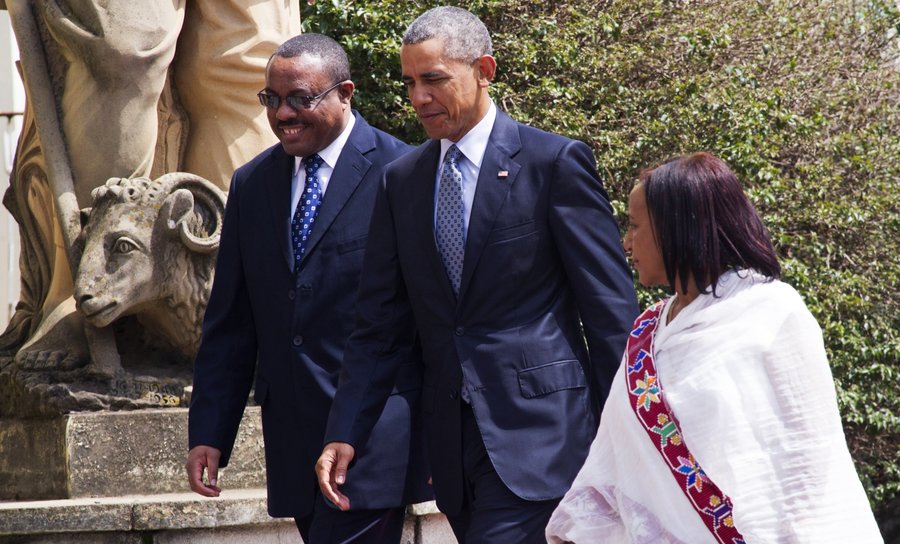 WASHINGTON (HAN) August 21.2016. Public Diplomacy & Regional Security News. By Tom Malinowski. The Obama administration’s top official promoting democracy and human rights,Tom Malinowski, says the Ethiopian government’s tactics in response to protests in the Oromia and Amhara regions of the country are “self-defeating”.  Writing ahead of the arrival of U.S. Secretary of State John Kerry in Nairobi for talks on East African issues, including security, Malinowski says Addis Ababa’s “next great national task is to master the challenge of political openness.”


The United States and Ethiopia have years of strong partnership, based on a recognition that we need each other. Ethiopia is a major contributor to peace and security in Africa, the U.S.’s ally in the fight against violent extremists, and has shown incredible generosity to those escaping violence and repression, admitting more refugees than any country in the world. The United States has meanwhile been the main contributor to Ethiopia’s impressive fight to end poverty, to protect its environment and to develop its economy.

Because of the friendship and common interests our two nations share, the U.S. has a stake in Ethiopia’s prosperity, stability and success. When Ethiopia does well, it is able to inspire and help others. On the other hand, a protracted crisis in Ethiopia would undermine the goals that both nations are trying to achieve together.

The recent protests in the Oromia and Amhara regions present a critical challenge. They appear to be a manifestation of Ethiopian citizens’ expectation of more responsive governance and political pluralism, as laid out in their constitution.

Almost every Ethiopian I have met during my three recent trips to the country, including government officials, has told me that as Ethiopians become more prosperous and educated, they demand a greater political voice, and that such demands must be met. While a few of the protests may have been used as a vehicle for violence, we are convinced that the vast majority of participants were exercising their right under Ethiopia’s constitution to express their views.

Any counsel that the United States might offer is intended to help find solutions, and is given with humility. As President Barack Obama said during his July, 2015 visit to Addis Ababa, the U.S. is not perfect, and we have learned hard lessons from our own experiences in addressing popular grievances.

We also know Ethiopia faces real external threats. Ethiopia has bravely confronted Al-Shabaab, a ruthless terrorist group based on its border. Individuals and groups outside Ethiopia, often backed by countries that have no respect for human rights themselves, sometimes recklessly call for violent change.

Ethiopia rightly condemns such rhetoric, and the United States joins that condemnation. But Ethiopia has made far too much progress to be undone by the jabs of scattered antagonists who have little support among the Ethiopian people. And it is from within that Ethiopia faces the greatest challenges to its stability and unity. When thousands of people, in dozens of locations, in multiple regions come out on the streets to ask for a bigger say in the decisions that affect their lives, this cannot be dismissed as the handiwork of external enemies.

Ethiopian officials have acknowledged that protestors have genuine grievances that deserve sincere answers. They are working to address issues such as corruption and a lack of job opportunities. Yet security forces have continued to use excessive force to prevent Ethiopians from congregating peacefully, killing and injuring many people and arresting thousands. We believe thousands of Ethiopians remain in detention for alleged involvement in the protests – in most cases without having been brought before a court, provided access to legal counsel, or formally charged with a crime.

These are self-defeating tactics. Arresting opposition leaders and restricting civil society will not stop people from protesting, but it can create leaderless movements that leave no one with whom the government can mediate a peaceful way forward. Shutting down the Internet will not silence opposition, but it will scare away foreign investors and tourists. Using force may temporarily deter some protesters, but it will exacerbate their anger and make them more uncompromising when they inevitably return to the streets.

Every government has a duty to protect its citizens; but every legitimate and successful government also listens to its citizens, admits mistakes, and offers redress to those it has unjustly harmed. Responding openly and peacefully to criticism shows confidence and wisdom, not weakness. Ethiopia would also be stronger if it had more independent voices in government, parliament and society, and if civil society organizations could legally channel popular grievances and propose policy solutions. Those who are critical of the government would then have to share responsibility, and accountability, for finding those solutions. Progress in reforming the system would moderate demands to reject it altogether.

Ethiopia’s next great national task is to master the challenge of political openness, just as it has been mastering the challenge of economic development. Given how far Ethiopia has traveled since the days of terror and famine, the United States is confident that its people can meet this challenge – not to satisfy any foreign country, but to fulfill their own aspirations. The U.S. and all of Ethiopia’s friends are ready to help.

Tom Malinowski is the U.S. Assistant Secretary of State for Democracy, Human Rights, and Labor.