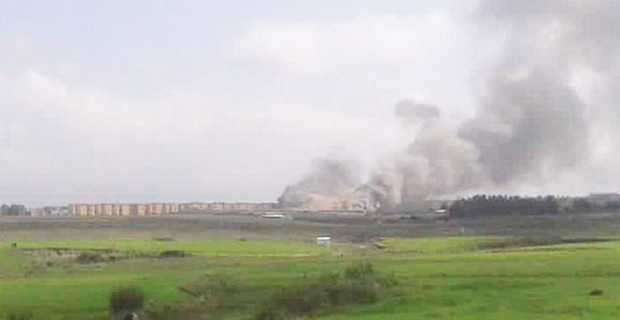 ADDIS ABABA (HAN) September 4.2016. Public Diplomacy & Regional Security News. A prison in Ethiopia where high-profile politicians are held has caught fire and gunshots were later heard there, according to media and opposition activists in a country gripped by a wave of protests.

The jail, Qilinti, is on the outskirts of the capital Addis Ababa and is used to imprison leaders of the Oromo ethnic group, among others. Members of the Oromo community have been leading demonstrations against the government since November, demanding more political and economic freedoms.

Fortune, a privately-owned newspaper, reported that there had been 20 casualties, but did not specify whether it meant dead or wounded. It carried a photograph of a huge plume of smoke billowing over a row of buildings, and said the fire had been brought under control by Saturday evening.

The paper said that three firefighters had been taken to hospital with breathing difficulties.

A pro-government radio station reported that one person had been killed, and six injured. Opposition activists put the number of dead at between 20 and more than 30, citing family members of inmates.

Al Jazeera could not independently verify the reports.

Fortune, citing sources, reported that the fire had been deliberately started as part of an escape attempt and said that police had now taken control of the facility from prison officers.

According to the New York-based Human Rights Watch group at least 500 people have been killed by security forces since the protests began in November. Though demonstrations started among the Oromo, Ethiopia’s biggest ethnic group, they later spread to the Amhara, the second most populous group.

Both groups say that a ruling coalition is dominated by the Tigray ethnic group, which makes up about six percent of the population.

The government has denied that violence from the security forces is systemic, though a spokesman told Al Jazeera that police officers “sometimes take the law into their own hands”, pledging an independent investigation.

Authorities have blamed opposition groups inside and outside of the country and what they have called “anti-peace” elements for the chaos.
The governing Ethiopian People’s Revolutionary Democratic Front last month rejected a United Nations request that it send in observers, saying it alone was responsible for the security of its citizens.

The government, a close ally of many Western nations, is accused by rights groups of regularly cracking down on the opposition and jailing journalists. At elections last year, it won every seat in the 547-seat parliament.