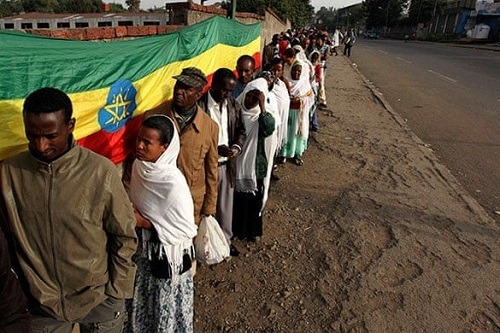 The Sixth National Election to be conducted in Ethiopia in line with the recommendation of the Ministry of Health and the resolution passed by the HPR is on the horizon. The National Electoral Board has recently reported that 90 percent of purchases required for the election have already been done. The postponement of the election earlier made by the request from the NEBE and endorsed by the House of Federation was effected due to national precautionary measures to be taken in combating the spread of the COVID-19 pandemic in the country.

In its recent regular report to the HPR, the Ministry of Health has suggested that the national election could be conducted with full compliance to the rules and regulations set by WHO and additional recommendations issued by the Ministry.

Given the decision made by the country’s legislature, competing political parties are expected to make their own preparations to participate in the upcoming election. The 6th round of national elections will be conducted in a political atmosphere of a battle between forces rallying behind the national reform and those who wish to see a political turmoil under the guise of self-determination that chastises the importance of a national front against poverty and destitution.

Furthermore, the coming election is conducted under a situation in which the country is getting ready to implement a ten years nation plan which is expected to promote equity by effectively meeting the needs of the marginalized poor.

Many leaders of the political parties in the country speak of the importance of a peaceful, credible, free and fair election. To what extent are they ready to contribute to the prevalence of peaceful transparent and fair election in Ethiopia? Yes, the government at large and the NEBE have their own duties to carry out fair, transparent and credible election in the country.

The first and the most important consensus need to be related to the FDRE Constitutions which charts out not only important provisions for national election but provides the basis on which parties and regional governments operate. There is no question that some articles of the constitution need to be amended through the amendment provisions set in the constitution itself. It is however regrettable to observe that almost all political parties remain active only for few months during their formation and in the event of elections. We do not hear much of their activities in between these periods. It is also important to note that most of the political parties are formed on ethnic lines with specific agenda for their own nation or nationality putting the national agenda at secondary level. This coincides with the formation of the federal system on ethnic basis.

Whatever the case is all the parties or fronts operating in this country are legal entities and the condition of their full adherence. Their de-facto existence does not make them legal or misinterpretation of the articles of the constitution cannot guarantee the legitimacy of their political activities.

Parties in this country are mostly confined to boring pressers that lack clarity and mostly target the ruling party only when some issues are raised or become apparently controversial. Such trends are harmful for coining a national consensus acceptable and applicable among parties.

Many ethnic parties still act as liberation fronts while they are summarily addressed as parties or opposition parties operating in a situation of confusion between parties and fronts. There is no standard set to differentiate between a party and front. Whatever the case is, it is important to conduct the coming election in the most transparent manner to avoid misinformation and any kind of abuse of the democratic rights of the electorate.

The next election is indeed a litmus paper for the level of success of the democratic reforms over the last two years and needs to be handled in a trustworthy manner not only for the voters but also for those who observe the election process .